I am extremely busy with work right now and am finding little time to write or catch up with all your blogs.  Normal service will resume in the New Year but I'd like to take this opportunity to wish you and your loved ones harmony, happiness and much festive fun!

Merry Christmas and a Happy New Year.  See you all next year!
Posted by Angie at 14:56 23 comments:

A calm descended over us on Monday when I took these pictures.  We've had a deluge of wintery storms over the weekend.  What a real mixed bag it has been.

This post is the penultimate End of Month view for the year.  And I must say that this meme hosted by Helen - The Patient Gardener is an extremely useful tool.  It encourages me/us to concentrate on our vision,  To focus on a particular area throughout the year and because this particular spot is highlighted each month, I am motivated to keep on top of things.  As gardeners it's almost impossible to get it 100% correct first time. Having a year worth of posts to refer to over winter, to ponder over what worked, what didn't and what may or may not in future is I think an invaluable reference to have.

The jobs I set out to do since last month are I am pleased to say all completed.  The front garden is a far emptier looking than it has been for months.  I edged the lawn in anticipation of perhaps getting a couple of clear dry days and giving it a final cut.  That was not to be however.  Looking at the latest pictures the grass doesn't look too bad but it is longer than I would prefer.

As well as weeding and a good tidy up of some of the perennials, the whole are has received a mulch.  I don't like leaving too much winter debris lying around.  To me it harbours more garden nasties than I can bear.  The last of the taller roses have also received a prune back by half to prevent possible wind rock.  The others that remain untouched don't need it, I think.  They will all be pruned accordingly in springtime. The winter flowering Jasmine is blooming against the fence and has now reached to bottom rung of the trellis.  I will be able to remove the canes that support it now and begin tying it so it spreads out.  It is not my favourite plant, I've said this many times but am willing to give it time to grow on me.  I suspect that as soon as I come across an alternative I won't hesitate to replace it.


Mulching the entire garden at this time of the year is not something I've done before so this is a bit experimental really.  Whether or not all the plants will appreciate this treatment might well be another matter that I will have to address come spring but the roses, I am assured by my friend (a keen rose grower) will benefit.   I keep in mind that this garden was primarily all lawn a little more than a year ago and has in all honesty had little improvement done since planting out other than some compost added in planting holes and the privet hedge mulched with manure last spring.  So I think any improvement to the soil I can provide must be a benefit.

The Liriope muscari Royal Purple had some good intentions, but sadly the cold has stopped it dead in it's tracks.  There are masses of unopened buds under all that foliage.

I can't sing the praises of Salvia Amistad enough, it has bloomed since around the end of July and is presently continuing to do so.  The downside to this wonderful plant is the fact that it is not hardy here.  We can't have it all can we?

Rosa Teasing Georgia is a plant that I have been guilty of a slating in the past but she seems to be coming good now.  The stems are still a bit weak in my opinion.  Many of you expressed that often DA Roses can be a bit weak in their first years.  Of course, I bow to your superior knowledge and give it at least half a chance.

Lastly, a battered and bruised late bloom from R. Fighting Temeraire is just about hanging on in there. 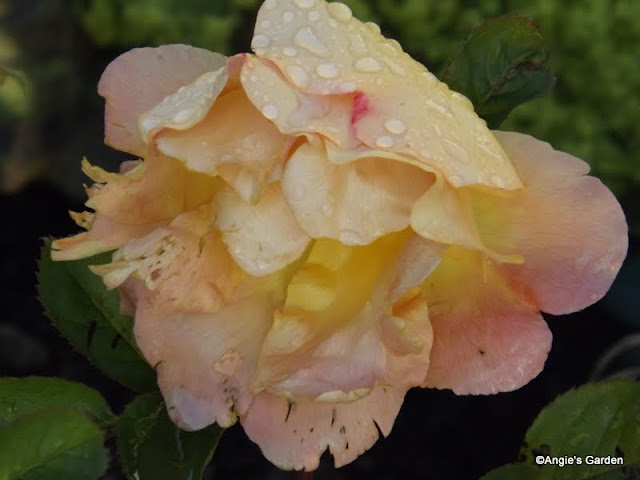