It's September and for this month's Bloom Day Post all the usual suspects are blooming right now in my Edinburgh garden.  It's my opinion that September, like April, is a time of the year when we can really notice the distinct difference in growing conditions between the north and south here in the UK. I suspect as in previous years some of you will tell me that many of the same plants have long gone over in your garden.

Sedums around the garden are only just coming into bloom.  Rosa Princess Alexandra of Kent is also blooming again, as is a scrambling blue hardy geranium.  The white Stachys has been in bloom for months now.  I want to divide this single specimen in spring and replace the rather disappointing white flowering Nepeta. I find it odd that both the blue and pink flowered varieties do well yet the white one has not done nearly as well.


My pots of Agapanthus are still going strong.  They have truly excelled themselves in spite of the rotten summer.  The white flowering variety is almost as tall as I am at 5ft.  I am having trouble showing them off at their best because they are not completely erect and their spread is well in excess of 6ft.  We are struggling past them on the back step!  In the middle my rescue pot has well in excess of 30 blooms and A. africanus has thrown up some more stems.  All good in the Agapanthus department this year.  They'll soon be tucked away for winter.


The Japanese anemones are just getting into gear.  Many buds on most with only the first bloom to open on each plant.  Except A. Ruffled Swan, which has been blooming for a few weeks now.  I had my doubts as to it's identity since the first few blooms were singles but now are semi-double as I expect them to be.  Nepeta grandiflora Dusk to Dawn with the ever sprawling Potentilla nepalensis Miss Willmott are still blooming this September.  I never did get round to cutting back the Sanguisorba foliage - a shame because it really spoils this wee corner.

Cotinus coggygria Dusky Maiden is always chasing it's tail.  Cotinus are always last too leaf up in spring therefore wait until this late in the year to flower.  Blooms were laden with rain on Monday.

Who's been nibbling my Colchicum?  Those pesky slugs no doubt!  The first Colchicum blooms of the year.  This shot taken a couple of days ago, they have been brought to their knees

Cyclamen hederifolium are coming out too.  This pink flowered variety I suspect will eventually be crowed out by this deciduous lady fern.  Elsewhere little pops of white flowering varieties have been blooming for a couple of weeks now.  I am slowly introducing these wee stalwarts of the autumn garden in more appropriate spots.  It would be easy to lift these and pop them elsewhere but the Lady Fern does spread a bit and I worry that I inadvertently introduce it where I don't want it!  I've never had any luck in spreading the seeds.  But do wonder if perhaps I weed the seedlings out rather than them fail.
The top border providing some late summer colour.  Helenium Moerheim Beauty is doing it's best. Taking a battering by winds and rains.  I removed the Lupins that previously grew here in front of it and did a good job of hiding the ugly bare stems.  I am thinking along the lines of encouraging another clump or two of the Persicaria.   I am in no hurry and that decision can wait until spring.  My priority for this border this autumn is to make space for the Buddleia globosa which is planted in a totally inappropriate spot.  But I am really struggling with which plats to sacrifice in order to make room. 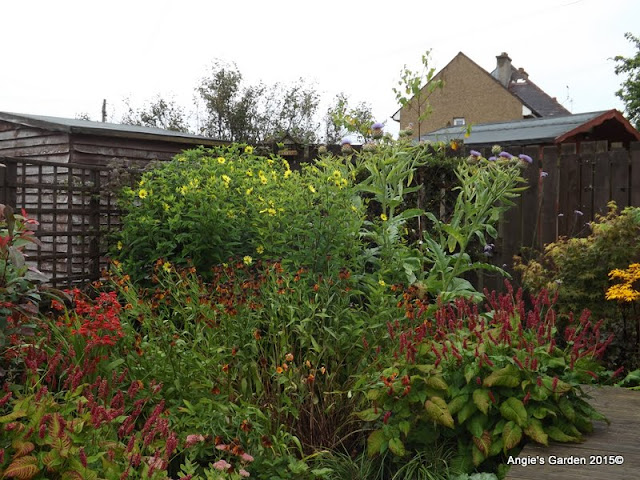 As autumn approaches, evidence of this is all around the garden now, the Asters are still tight in bud.  I note that the powdery mildew is yet to become an issue this year.  Meanwhile, at the top end of the shady bed, flowering for the first time this small clump of Aconitum I planted back in March.  It's been a long wait to enjoy these blooms.  The early flowering varieties are long gone and am pleased to have introduced these into the garden.  Aconitums are one of my favourites despite their notoriety. 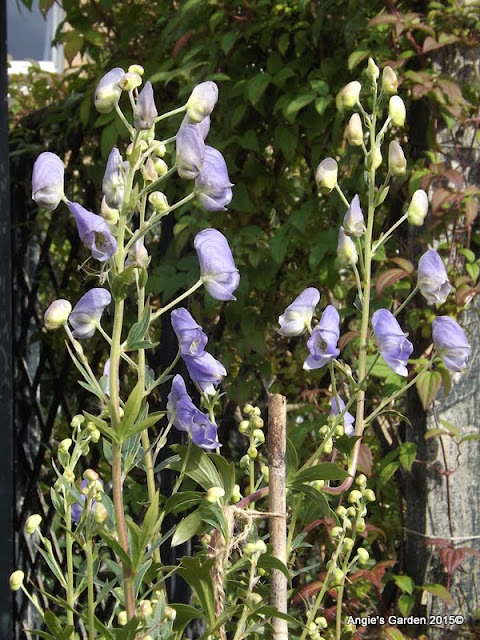 The Heptacodium miconioides is another that is full of unopened flower buds.  It will be a race against time as to whether or not those buds open before the first frost, it usually is and can be a hit or a miss as to whether it will bloom or not.  I was quite surprised to see the first bloom of the witch hazel out this September.  It does leave me scratching my head though - those ribbons should be more orange than they are yellow.  My garden really is at sixes and sevens.  I have a Hellebore, a Pulsatilla, an spring flowering Clematis and the Pyracantha all deciding to bloom right now. 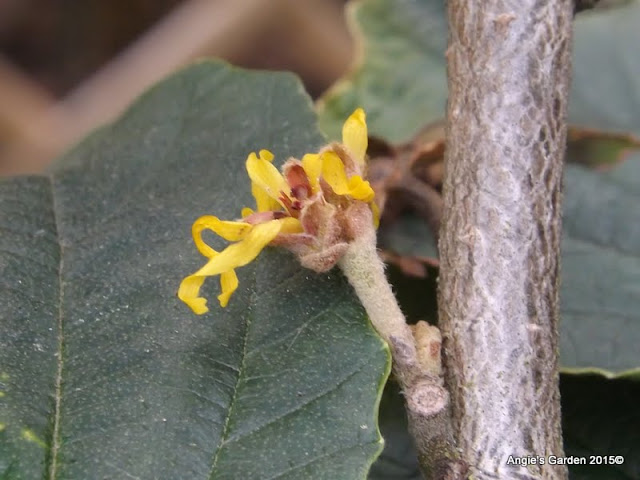 I fear I may have rambled on too much so a big thank you for reading and I hope the remainder of your week is a good one!
Posted by Angie at 15:04 37 comments:

It's the seventh of the month therefore it must be time for this month's Tree Following Post.  The days just seem to blend into weeks right now.  Where have the last 4 weeks gone?

The nights now are drawing in and there are signs of autumn here and there in the garden.  I may have done little else but moan about our lack of summer this year but this last few days has saw a huge improvement on what's gone on in the previous 3 months.  For the first time this year it actually feels like summer.  Calm before the storm?  Who knows!?

As the name would suggest my rowan tree, Sorbus Autumn Spire, should come into it's one over the next month or so.  Purchased and planted for autumn colour, there are the slightest hints that autumn is on it's way.

Berries are not abundant, there are no more than 20 on the whole tree.  Being a young tree I suppose I should not expect too much.  I can see from the window that the Rowans growing wild along the river nearby are a mass of red berries right now. 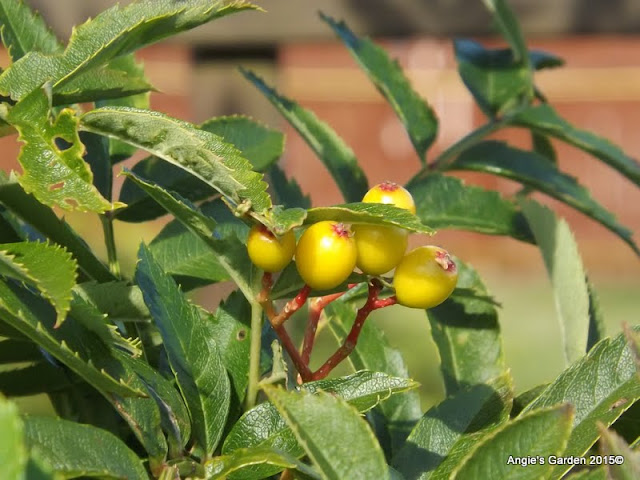 First signs of reddening of the foliage. 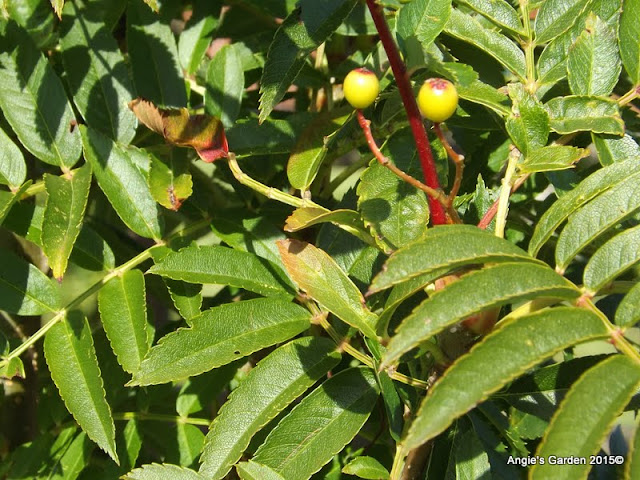 Might there be time for this lot to ripen? 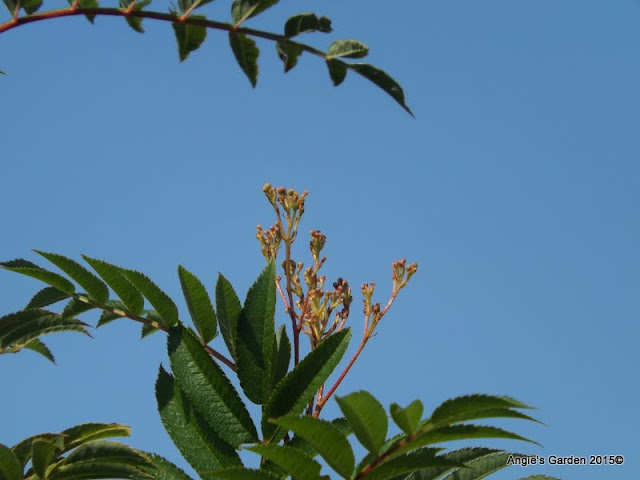 If I aim my camera down behind the plants, you can see there are weeds.  I am generally a bit of a weed freak and am usually on top of weeding.  I have been guilty of neglecting my weeding duties of late.  I am certain Mare's Tail has not been an issue in this area before.  I need to get on top of this tout suite! 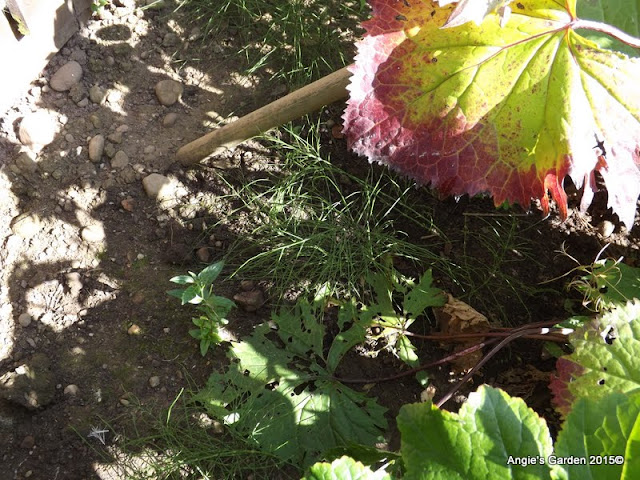 The mid day sun provides some shadows on the fence behind. 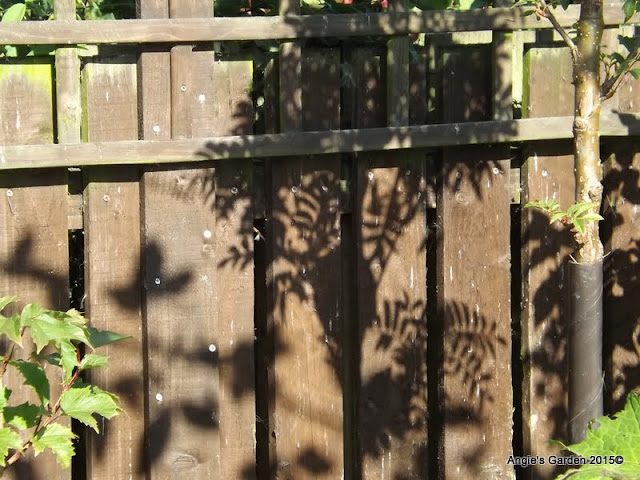 My knees are already aching at the mere thought of a week's worth of weeding.  I hope you have something far more exciting and a lot less labourious planned!
Posted by Angie at 13:41 24 comments: