The recent winds and fierce rain fall has taken it's toll on a few plants here and there.  Those winds were described as brisk the other evening by the weather forecaster.  Brisk?  I think he under estimated them just a wee bit.  It's still cold and frosts are still forecast.  Will it ever end!!

The rotten weather has allowed me to continue with the decorating indoors, I am now the hallway (upstairs and down), it's all doors, doors and yet more doors.  I feel as if eyes are turning square. Still, the end is in sight and I'll then be able to enjoy the garden a bit more.

Seeing that it's the middle of the month, it's time to post our Garden Blogger's Bloom Day posts.  I didn't need much persuading to take a break and get outside with the camera.  If you are in need of a pick up, please pop over to May Dream Gardens and rejoice with other bloggers as we share what's blooming in our gardens on the 15th of every month.  Everyone is welcome.

For a change, I thought I'd start out in the front garden.  The front garden which is the focus of my EOMV is coming along nicely.  There are many plants on the cusp of blooming but sadly they haven't made this month's post.
Lack of sun has meant that I've seen very few bees and even fewer butterflies recently.  An orange tip flitted by the other afternoon but that's been about it really.  Through the side gate, the side garden which I have really done little with over the years and is in dire need of a make over.  Standing by the gate - the view up towards the back garden.  There are some nice plants in there but being so long and narrow I find it difficult to bring them all together.  It's time I think I had a good long hard think about what I'd like to achieve here.  It's shady until mid afternoon, the soil out there is the best the garden has to offer and that's been without any amendment from me. 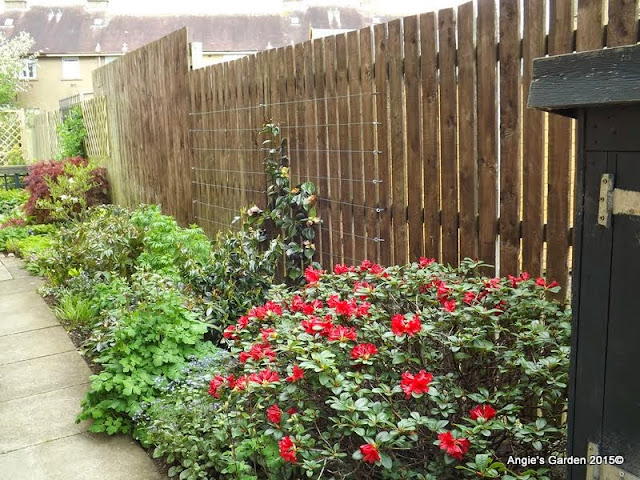 In the foreground, an inherited Rhododendron is just beginning to bloom.  A couple of self sown aquilegia are now too big for their boots and their particular chosen spots for that matter. Sandwiched between them Brunnera macrophylla Jack Frost.  The mid section is still a mass of foliage right at the minute.  At the far end, Magnolia stellata is holding on to the last of it's blooms, Dicentra exima King of Hearts, Lamium orvala, Dicentra Lamprocapnos spectabalis and Brunnera macrophylla Hadspen Cream are flowering right now.  Foliage pays an important part in this side garden and I like all the different shades and textures.


The shady bed in the graveled area which was extended and had a bit of a reshuffle back in autumn has started filling out.  In the end nearest the house, Cotinus Dusky Maiden (when it finally leafs out) will dominate this bed in summer, meantime Bergenia Overture is going over and Polygonatum multiflorum is just coming into bloom.  Just out of shot purple leafed Corydalis is also blooming alongside the pale blue Pulmonaria with no name.   Ajuga Burgundy Glow, which I thought I had got rid of has appeared right in the centre of this group and is hidden by it's neighbours.  You can just make out a couple of blue flowering spikes in the left of the shot.  I'll leave it for now and see if I can find an alternative home for it.
In the middle section of this bed, there are many 'wee' plants blooming.  Again, the taller plants will hide these when they have gone over.  I am thrilled to find the Kirengeshoma is now showing.  I had myself in a bit of a tizzy a couple of weeks back as I thought it hadn't survived it's move.  I hope that the frosts haven't done too much damage to it.  It didn't flower the first year I grew this because the new growth was blackened by frost.  Last year it did well, hopefully it's late emergence has helped. The hellebores are being left to their own devices this year in the hope that I may get some seedlings to bring on.
On the sunnier side of the graveled area, there is very little in bloom right now.  Making the biggest impact in this border right now is Phlox subulata Emerald cushion and Primula vulgaris Drumcliffe is doing it's best to hold on in there.  Geranium pyrenaicum Bill Wallis is the first geranium to bloom this year.  Disappointingly, the new variegated Euphorbia characias Glacier Blue and an older Euphorbia characias Silver Swan are really struggling.  I think it's time I faced facts and accepted they don't want to grow there.    Peonies, poppies, Alliums and Honeysuckle are gearing up to bloom but sadly not in time for this month's post.
There really is nothing new in bloom up in the back garden proper.  The Camellias, Pulmonaria and Drumstick Primula have almost gone over on the shady side.  The Primula are last year's divisions and they haven't half filled out.  I need now to separate the white ones from the pale purple ones. They will find a home in the area I now call my mini woodland. 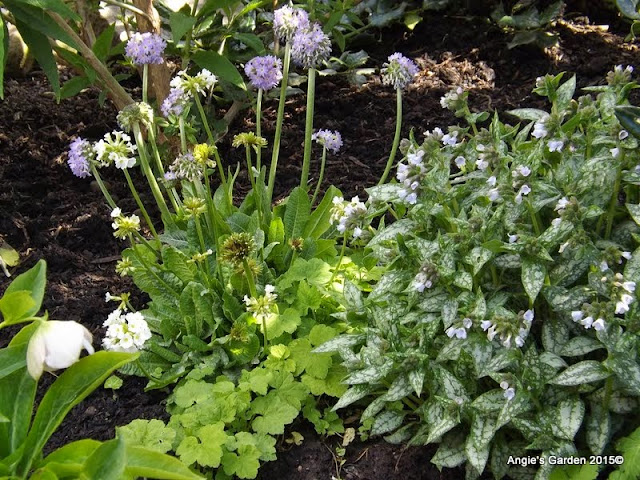 In the Mini Woodland - I think perhaps I need to find a bit more of an interesting name for it but for now Mini Woodland will do.  I have to get right down flat on my belly to get a decent shot of the Primula still flowering there.
Beneath the Heptacodium, Anemone nemorosa (courtesy of Annette @ My Aberdeen Garden) is blooming it's heart out.  It's one of my favourites right at the minute.

Another favourite this week grows in a pot at the front of the shed.  Clematis cartmanii Pixie is a plant who's hardiness rating for here in Scotland is not ideal but now in it's fourth year, it seems to be doing alright.  I never count my chickens though and always look on each year as it's last.   It is scented but it's not been warm enough to make it very noticeable.  Odd too that it has not been affected by the late frosts. 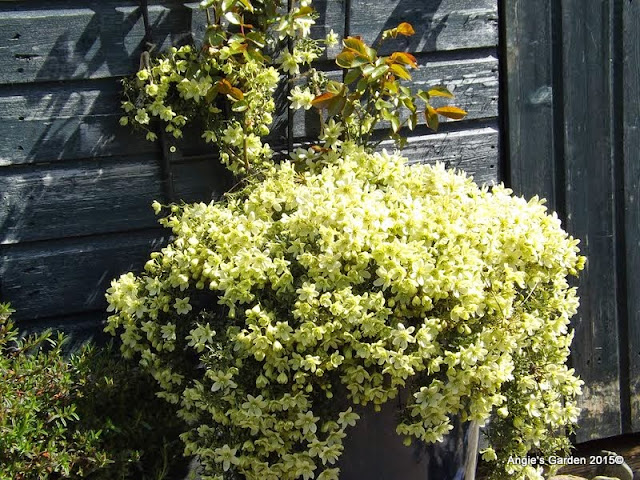 Lastly, blooms on a plant that will feature in my next Bloom and Grow post but I couldn't wait that long to share them with you.  Drum roll please.......Cornus x rutlan Ruth Ellen.  Very fetching I think. 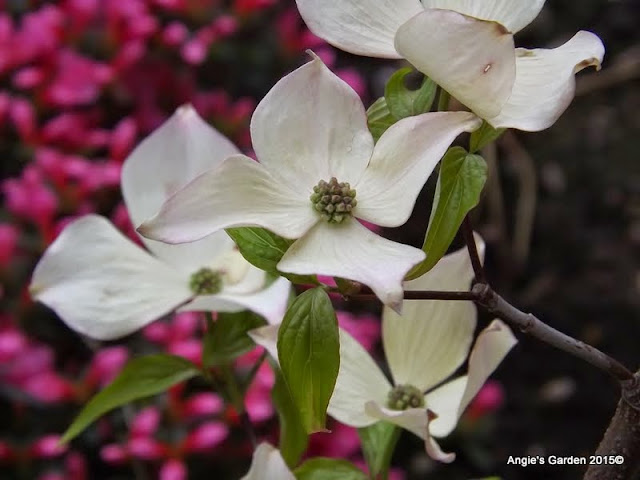