It dawned on me a couple of hours ago that it was the last day of the month and I had not prepared any shots of the front garden this week.   The wind is still very persistent and making it extremely difficult to take pictures.  Wider shots are fine but going through the many close up shots I've taken, I probably could have saved my time and not bothered.


Looking west and you can really see everything is filling out now.  I can't get over how lush and thick that front hedge is looking.  I do note though that the plants in the bed to the right (nearest to the house) are all reaching inwards towards the centre of the garden.  I thought that the sun came round the house early enough not to have such an effect, I was obviously wrong!   I finally got round to removing the Nandini domestica Gulf Stream, it did not like this windy site at all and had looked absolutely rotten for months.


You will see that I have failed yet again in getting some grass seed down.  An Iris has sprung up almost slap bang in the middle of the arch.  It does look odd but I will let it do it's own thing until autumn and then find it an alternative home.  The bearded and dutch Iris all have buds but are still rather shy.  It's still cold here during the night.  In fact three mornings this week (when I've finished work at 3am) the frost warning has come on in the car.

The view towards the house shows Rosa The Lady of Shalott, I just wish I could remember one L and two Ts without having to look it up each time I write it, she is by far the fullest and tallest rose right now.  All are looking reasonable right now but they too are very slow at putting on buds.  They were fed with Toprose back in spring and it's my understanding that they should not be fed again until after the first flush of blooms.  What do other UK gardeners do with their roses?  Might they benefit from some sort of liquid feed to encourage them a bit? 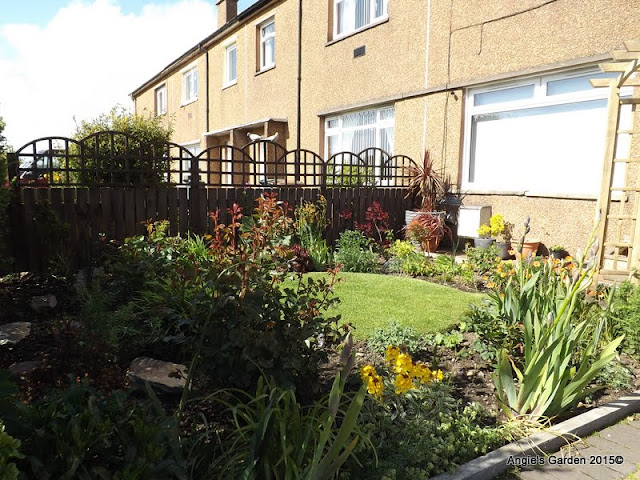 Standing by the front window the view outwards clearly shows how lush and healthy the privet hedge is looking.  I am fair impressed with how well the manure has worked, a job worth doing if you are ever considering it. 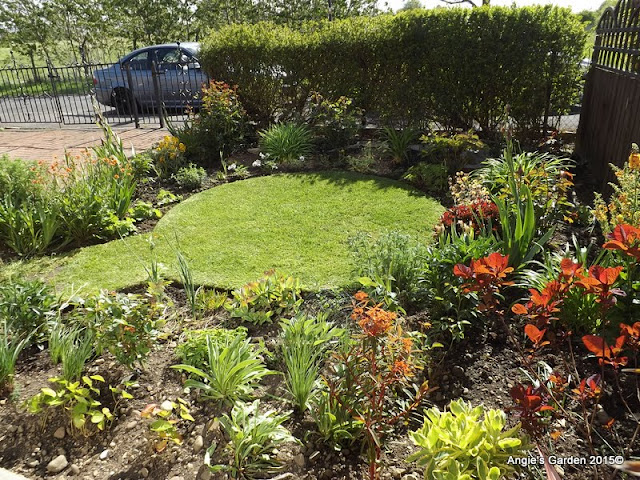 The shape of the lawn is most apparent from this angle.  It takes me longer to get the mower and edge trimmers out and set up that it does to mow it.  The flymo glides over this whole area in less than 3 minutes.  Mowing this lawn is no longer a chore.

Pleasingly the strappy Iris foliage is no longer annoying me, as predicted by one or two of you, they would be softened by the other plants as they filled out.  Instead, my annoyance this month turns to Geranium renardii.  You can make out those white blooms at the far side.  I debated and deliberated over adding white out here and it appears I should have taken heed.  There are one or two other white blooms still to come.  Namely Anthemis tinctoria Sauce Hollandaise and a couple of Leucanthemums.

There are a few gaps here and there which will be filled with some of my Salvia Amistad cuttings just as soon as I can get them in the ground.  Sadly, the parent plant did not make it through winter.  Other winter casualties are Achillea Terracotta and one of 3 Achillea Feuerland.   I did not expect either of these to perish.

What's blooming out there right now?

If my money had to be place on any plant not returning Verbascum Clemantine would have been favourite.  However, it is just coming into bloom.  Another plant that is not liking the wind.  I've stuck in a bit of support but that isn't working.  I will need to wait until a calmer day to untie it and see what I can do about it.  V. Clematine's colours are perfect for my scheme.


Erysimum Walberton's Fragrant Star is still looking good.  The silver edged Lady's Mantle, Alchemilla conjuncta is also putting out some frothy blooms.  This is my favourite Alchemilla and in all honesty was another I was rather sceptical about how it would look out here but I think it's looking ok.

Euphoriba griffithii Fireglow is one plant I could not be more pleased with.  Despite it's Tower of Pisa list, I love it!


I had hoped that last month's newbie would have opened it's delicate little blooms for this post.  Almost!  Lathyrus transsilvanicus, I've been told will cope well with the wind out here.  There is no mistaking this little thing as a member of the pea family is there?


Stuck in limbo Podocarpus x Young Rusty is neither in summer or winter colour.  It's at that in between stage.  I had at first thought the paler growth was some sort of bloom or cone but closer inspection allowed me to see it was just new growth.  This plant is, as I've only just discovered, is as toxic as Yew.

That's my lot for May's End of Month view so please join me over at The Patient Gardener's Weblog where many more bloggers post about their chosen views.  There's lots to see, it's a very popular meme.
Posted by Angie at 19:38