Keeping his beady eye on me, Mr Blackbird, watches with interest as I interrupt his lunch break.  Without fail, at around 2 o'clock every afternoon he appears for his fill of Pyracantha berries.  Mrs Blackbird however, is quite elusive at the moment.  I've seen her no more than 4 or 5 times since they returned to the garden a couple of weeks ago.  Whether or not they are the same pair that visited last year is anyone's guess really - I like to think that they are and feel privileged that they have.


I donned the wellies and mowed the lawn last week.  It really did need it.   I could not bear to look at it anymore.  It was in parts very long and as I would expect at this time of the year, damp.  Thankfully the spot that gets shown for the End of Month's View is presentable - the shadier side, is having a bit of a bad hair week!  It will pick itself up, eventually!


I has surprised me at just how much green is left up here.  Both the Philadelphus and Cotinus have yet to drop their leaves.  Of the herbaceous perennials lingering, the Cardoon is by far looking rather confussed this November/December time.  Minus the autumn colours of Cotinus Golden Spirit to the rear, you could be forgiven for thinking it was a different time of the year.

Up on the top tier, I've put in a bit of a temporary path.   I had some redundant stone edgers lying around, which had been bought a few years ago for a long gone project, I've used these to create a narrow path up on which I can walk without getting too muddy.   Just how practical they will turn out to be is anyone's guess but for now, they are doing a job and make it far easier to navigate around up there.  The little dog leg of edgers off to the right provides something solid under foot for when I refill the log feeder. 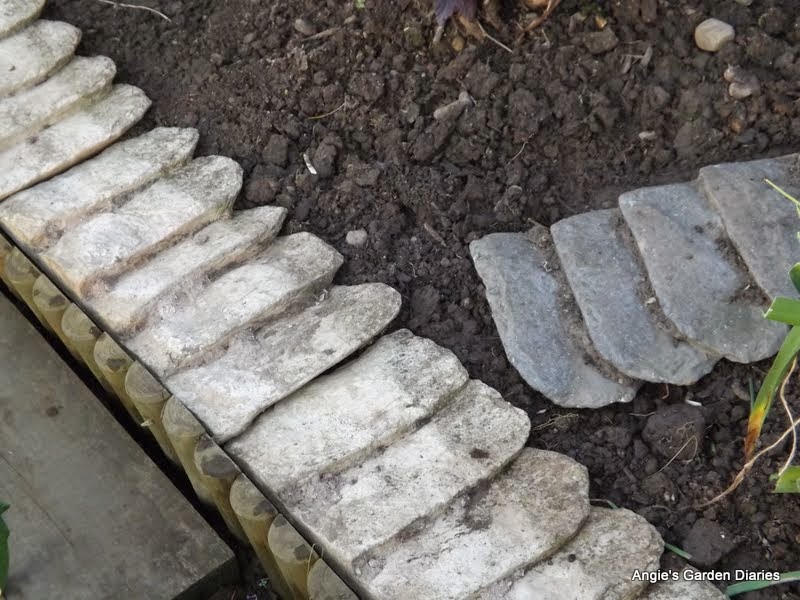 Both the Cotonoeasters that were planted to provide fence coverage are doing well and have put on a fair bit of growth in their first year.  The autumn colour on one is far more prominent that the other.  I will take a few years before they soften the fence but I'm pleased thus far.


I pointed out above that the Cotinus is holding on to it's leaves this winter.  Those gold/burnished gold tones really do stand out where ever you are in the garden.  Another that will only get better in time, me thinks!

Under the Pyracantha on the back fence, Crocus are well above the surface.  I'm sure we'll get a cold snap to stop them dead in their tracks before too long.  I had completely forgot that I had purchased a few pots of bulbs in bloom last spring - I checked back on one of my earlier posts and as well Crocus, there are some Iris here too, no signs of those yet though.


Before I pop over to The Patient Gardener's Weblog, too see what's going on in your garden, I thought you might like to see what I came across yesterday elsewhere in the garden.

I had been told that Mrs MacNamara was one that would flower early but I hadn't quite expected it this early.  Do you grow Galanthus elwesii Mrs MacNamara?  If so, is she early in your garden too?
Posted by Angie at 17:54