As well as my Bloom Day post, I'm kind of using this post as an update to what's been going on in the garden this last couple of weeks.  I'm having a hard time juggling everything at the moment and not had so much time to spend blogging.  I do try to keep up with what's been going on in your gardens, albeit I don't often have time to comment, please know I have been reading!

The promised Indian Summer, I think, got lost on it's way across the globe!  Granted temperatures have been a little higher than I'd normally expect here but from early evenings through to late mornings, it's been misty and damp, so a bit like India in the Wet Season.  The plants taking full advantage and I'm pleased that one or two are blooming for a second time this year.

Last post, there was a Hellebore flowering out of season.  This September, a Rhododendron and Cowslip have joined the party!  You are not seeing things.  This Rhododendron flowers at the end of every summer, I've read that Rhododendrons often rebloom if the season has been very dry.  Whilst it has been dry here, same can't be said of previous years and yet it bloomed bang on time in September the past 7 years.  I thinned out the Honeysuckle (L periclymenum Scentsation) in the larger picture and it seems to have taken exception and put on just as much new growth as I cut out, which kind of defeated the purpose really.  L Sweet Sue on the large trellis, flowered way back in May and that too seems to have found it's second wind.  I mentioned back in my July post that I was about to chop the Astrantia back to encourage a second flush of flowers.  A few of you commented on this at that time and as you can see - it works!  All now have lovely healthy foliage and pushing up a few flowers, which will continue right to the first heavy frosts. 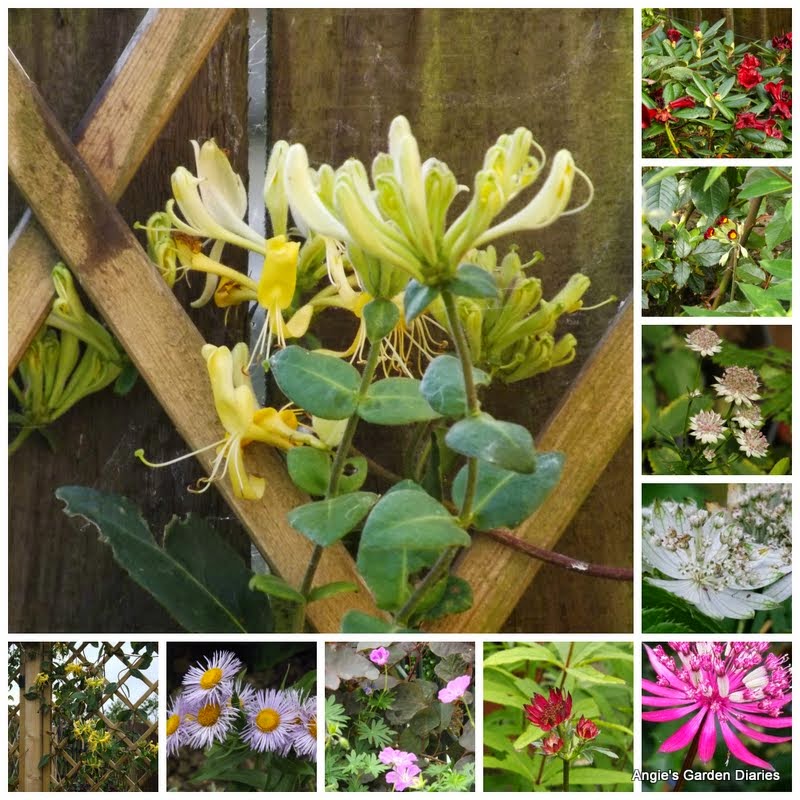 Roses reblooming this September - the only two plants not new to the garden this year are The Wedgewood Rose and Princess Alexandra of Kent.  I've fallen head over heals with Apricot and Yellow Roses this year.


I'm sure I've mentioned previously that peach/apricot roses will be the main feature of the front garden in future summers.  My improvements have been popped on hold.  I ordered Crocus bulbs online almost a fortnight ago and have yet to be dispatched.  This is the first time I've ordered any sort of plant on line and thus far, I can say I'm not terribly impressed.  I want to get those Crocus bulbs in under the roses before I get the perennials in, it would make planting a whole lot easier.  I've also ordered an arch, which will define the entrance to the front garden.  This I had not expected to be delivered so quickly, allowing me to get on with the other jobs, alas I'm stuck in limbo - I just don't possess such patience!

Out front at the moment, the Rudbeckia are still looking great, a yellow late flowering Kniphofia has finally decided to throw up some flower stems.  I suspect that these two will be a bit too zingy for my plans out here but lets enjoy them for now.  The pot of orange begonias covers some bare earth before the cats get their paws on it!

I'd like to introduce you to the culprit behind my latest plant addiction Rosa The Lark Ascending. The first rose I bought for the front garden, as soon as it bloomed - I was hooked!  Seen here with Salvia Amistad.  I have to say, of all the perennials in the garden, this newcomer has kind of taken my breath away.  I'm reading conflicting reports on it's hardiness therefore I must get some cuttings on the go tout suite!  The trellising is also new and doing a grand job of keeping back the neighbour's Kerria.  Now all I need do is concentrate on the suckers coming under the fence.  Whilst I detest this plant for it's growth habit, I don't mind the flowers.  Because of the way she prunes hacks at it, it flowers all year round.  I suspect, that's also the reason for all those suckers, her plant is trying its best to get out of the reach of those shears of hers.

A clump of Shasta daisies, having spent a couple of years in a container, struggled this year.  Now they have their roots in the ground are making a bit of an improvement.


The Buddleia providing much needed nourishment for the butterflies that are now starting to appear. The butterflies have obviously been about, just not in my garden, judging by the damage done on this red admiral's wings.

As we go through the gate down the side path, the side garden it mainly a spring border and along with the out of season Rhododendron blooms there are a few wee autumn treasurers too.


Out in the back garden, thinning out the bumble bee border is finished.  I took full advantage of the cooling temperatures and got to work on it.  The over crowded clumps of daylilies have all gone (elsewhere), the mildew infected groups of Monarda have gone to the great bit compost bin in the sky and the Escallonia who's only purpose (not intentional) was too act as support for a Clematis has been chopped back.  Unfortunately, getting it out of the ground is not going to be such an easy job.  I need to look into treating it with something to kill the roots in situ.  Come to think of it, I'm not sure 'The Bumblebee Border' is a suitable description now.  I need to rethink that description and rechristen it.

Three roses (Susan Williams Ellis, Princess Alexandera of Kent and Rhapsody in Blue) were used as colour inspiration.  The colours theme in this border will be Pink, Blue and White.  The newly extended space will, I hope, give this border a bit more of a cottage feel.  The Honeysuckle and Clematis already growing there will cover the fence and trellis, taller perennial foliage will also do their bit.  I've kept and added to the collection of good old garden stalwarts, aquilegia, peonies, hardy geraniums, sedums, nepeta and oriental poppies - this far corner still has a fair bit of colour and one of my favourite late summer bloomers is just coming into bloom.  Even one single flower stalk fills the air with it's sweet, almost candy like scent.  Just wish I could put my finger on what it reminded me of. 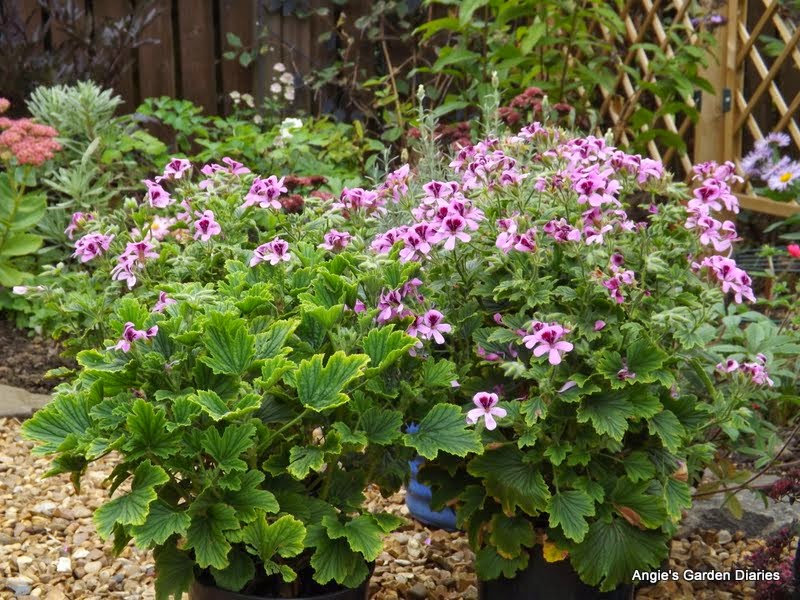 Lemon Scented Perlargoniums have only just decided to flower!  These are the remaining plants from cuttings I took last year.  I had cuttings root in water and a few gardening friends and neighbours have been gifted the remainder.

There is little to see in the left hand side of this border, new plants are still small and other perennials are currently in die back mode.  A couple of Sedums are however, just coming into their own.


Over the other side of the trellis - plenty of foliage paired with a few Clematis flowers.  The late summer flowering shrub Heptacodium miconoides is just coming into bloom.  You know it's been a good summer here when it flowers.  In general, this usually flowers later and the buds have been known to get caught by an early frost.  The Alchemilla is also throwing up a few late blooms too. 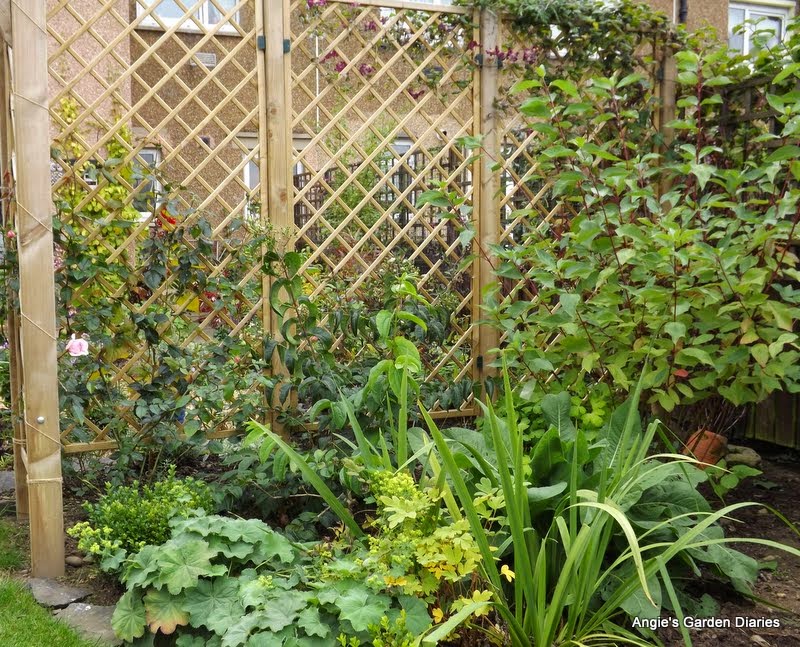 I had hoped Clematis Ville de Lyon would not suffer the powdery mildew it used to in it's old home but the move has not improved things.  I will, I think, need to source a replacement - a far more resistant form.
You know it's been a good summer if the Heptacodium manages to flower before the first frosts hit them.  There are not many shrubs that flower this late in the year and the fact that it's scented is another bonus.  It's a cousin of the Honeysuckle, just in case you are interested.

The top end, the sunniest spot in the garden and the topic of my EOMV is still looking in reasonable, I think. The perennial sunflower, Helianthus Lemon Queen, has exceeded my expectation.   New flowers are opening every day.  For the moment, I am leaving the tall stems of the Cardoon alone.  I am interested to see if the birds are attracted to those seed heads.  The yellow/orange berries of the Pyracantha adds a bit of colour to the back fence.  Sedum, Persicaria, Crocosmia, Verbena and Helenium still have their wares on offer for the pollinators. 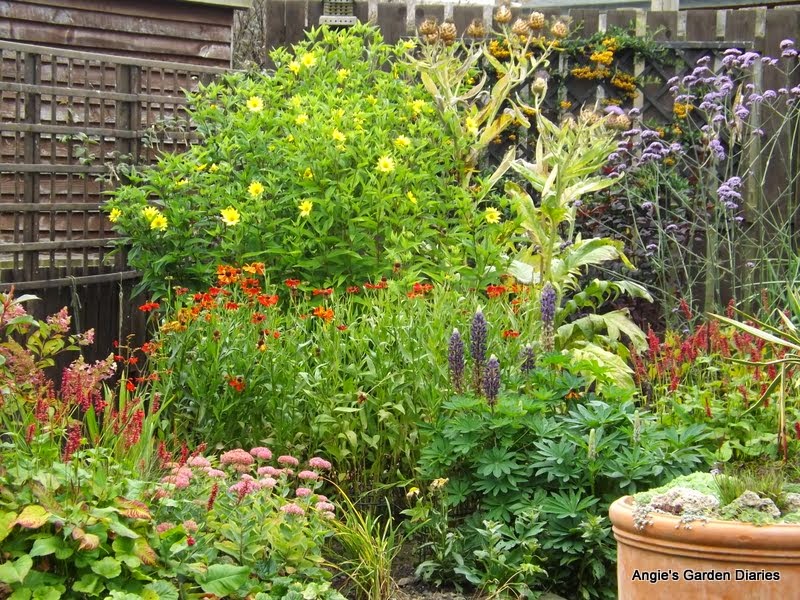 In the purple corner, there really is a bit too much purple foliage going on here.  This was not intentional, it was the only place I had gaps in which to move a couple of plants back in springtime when I was planting the trees.  I had also forgot the left over foxglove plant, that had been temporarily heeled in too.  The colour of the strawberry foxglove pairs perfectly with the darker foliage.

I love the Sedum and Heuchera combo - I do however need to keep on top of not letting the Heuchera flowers, otherwise it all gets a bit busy.  Rosa Lady Emma Hamilton, trapped between them and the Viburnum will be moved into the front garden pretty soon.  She flowered pretty poorly this year, I don't know if it's lack of sun or lack of space.  The foliage is healthy enough, which I would have thought was a sign she was happy enough.

More contrast and yet more purple foliage - this time Physocarpus Burning Embers makes a wonderful foil for the flowers of Kierengeshoma palmatum.

Well, that's just about it from my garden this September Bloomday post, as usual, it ends with an invitation to join myself and many other garden bloggers posting on the 15th of every month on what's blooming in their garden, regardless of where you garden.  We all love a nosy around other folks gardens don't we?  You can join in here too!

I end with a shot of the Fuchsias on the back steps. You can read all about how they came to my garden here.  I grow these for my mum (she lives with me), she loves Fuchsia and I'm not their greatest fan but for once I relented and to be honest, I'm kind of glad I did, they add a bit of colour to an otherwise dull stone step. 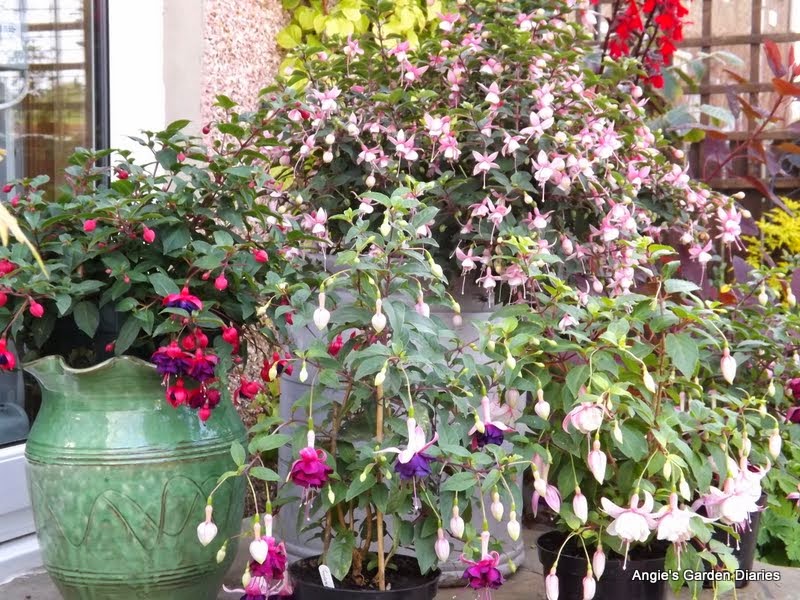