My mood of late as been a bit down, I've been stuck in the doldrums - I found that I had been a wee bit scunnered with the garden.  For days on end I struggled to get myself motivated to do any sort of garden related activity.  So apologies for not being quite up to date with what's been happening in your gardens.  I'm not entirely sure of what caused my mood but knowing I had to put a post together for my End of Month View at some point this week really encouraged me to get out and take stock of what's been happening.  Do join me and other garden bloggers over at The Patient Gardeners Weblog, where I'm sure there's been a lot more activity going on in other garden bloggers' gardens than there has been in mine!

The last couple of days this month was pretty much identical to the end of March - wet, windy and a chill in the air.  Temperatures this April have been way above normal and indeed what would be expected for springtime here in Scotland.  Although we've had rainfall - a couple of days heavy rain here and there certainly does not constitute an East of Scotland Spring!


I stated at the end of March that it was my intentions to work on the area that was being returned to lawn.  The area, having been compacted by me walking back and forth for the last couple of months, was somewhat waterlogged and I had to wait for it to dry out thus setting my plans back a few more days.  I was faced with two choices here - first choice drop the level and grass using turves, alternatively work over the remaining soil,  removing as many of the stones had had appeared as I could, level with fresh top soil and seed.  I opted for the later, it seemed that this would be the easiest option, labour wise.  Indeed it was, it took about half a dozen bags of top soil to level it over and raise a few remaining dips.  Grass seed down and the area has been strung and tied with torn plastic bags to discourage the birds, however, my cats were not discouraged and found it an extremely useful spot to hone their hurdling and hunting skills! Hunting each other that is.  Thankfully, the novelty wore off after a few days and not too much damage was caused.  I've remedied the damage they caused and now hopefully the seed can germinate.


As you can see from this month's End of View shot - planting has finished - I'm not entirely happy with the layout.  I feel my inexperience always get the better of me when planting out such a large area.  That can be improved on and will find my end of month shots a great help in the coming months.  Of course,  I will have to source bulbs in the autumn for early colour.  I mentioned last month the Photinia, which was already growing here when work started - it's purpose was, eventually, to disguise the front section of my shed - although it's still not 'doing it' for me.  The Hydrangea paniculata growing next to it has taken an absolute age to put on some growth.  Now that May is here, it's distinct lack of leaf is not the look I am trying to achieve! I might need to find a replacement. The taller shrub is Deutzia Strawberry Fields - a favourite of mine and has transplanted well, whether or not it will flower this year is another matter. 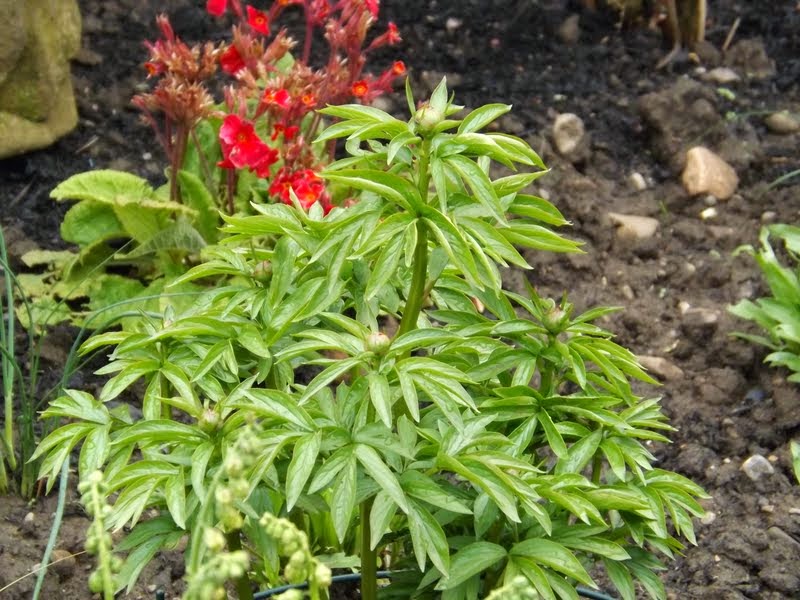 I took a bit of a chance back in March by lifting and moving a couple of Peonies - an early flowering lactiflora and an Itoh hybrid.  An early flowering variety was a good size and was full of buds - it doesn't appear to have flinched.  Time will tell soon enough if those fat buds mature enough to flower, I'm keeping my fingers crossed I get a few flowers.    The Itoh is doing well and was only just putting on growth, it's only got one flower bud though.  I brought with them huge rootballs, this may well be why they are doing so well.

A new plant to my garden and one I've never tried in any garden before is Bergenia - the variety is Overture.  Admittedly it was a bit of an impulse buy - I just wanted something that flowered around now.  I've chosen Geum Bell Bank as a neighbour - the colour of the flowers is picked up in the stems of the Bergenia.  I shall see how this combo works out.

﻿
As well as the Peony for early flowers, a plant that had been on my wish list for a heck of a long time but was proving difficult to source Papaper Orientalis Patty's Plum, I couldn't believe my luck when I came across it at a nursery local to me.  I've chosen some Allium Purple Senstation to partner it.


Further round just out of shot, more Alliums are happily growing - I've left a gap in the planting as I want to buy a new Peony - which one, I'm not quite sure.  The trouble is my local nursery is an award winning Peony grower and there's just too many to choose from!  I will wait until Peony flowering time and make my final selection then.

Well, that's about all for my End of Month View post this month except to share with you all the good news that as of this afternoon - the grass seed has finally started to germinate!  We shall have grass! Wishing you all a super weekend, with some lovely weather to boot!

Email ThisBlogThis!Share to TwitterShare to FacebookShare to Pinterest
Labels: end of month view 2014