Work on the garden renovations and Project Privacy continues.  I've encountered a wee bit of a problem sinking one of the posts for the last two sections of trellis.  An absolutely humungous lump of concrete!  Buried about 6 inches below the surface and it's bang spank in the middle of where I need to dig!  These things are sent to try us - I will not be beaten!  I will find a solution - I just need to sleep on it!  Digging it out will certainly not be practical - the solution will involve a trip to the timber merchant at some point no doubt.

Meanwhile, the garden is slowly coming to life.  The Crocus and Snowdrops will be gone before the Bloom Day post.  I got the camera out to distract me - I just needed to take my mind off that lump of concrete.

Two of the three clumps of snowdrops flowering in the side garden have turned out to be doubles.  This was not intentional.  The Snowdrops I rescued last year were split and divided and planted around the garden.  I'll move the clump of singles and keep the doubles in the same spot.

The snowdrops behind the pond cope well in so much shade.  The get no direct sunlight whatsoever.  I also note that a crown of a Drumstick Primula has appreared.  Although they are said to prefer a sunny site - I have tried a white one in this shady spot as a bit of an experiment.

We are still experiencing some windy days (and nights) but rainfall has still been at a minimum.  We had a couple of hail showers and about 2 minutes of snow fall this afternoon.  Luckily I managed to get a couple of shots of the Crocus yesterday - they've been fairly battered by the hail.  As plants have been moved around the garden - I am inadvertently taking bulbs with them  This is obvious from the fact that I'm finding little clumps in various spots - of course, creatures could also be doing this!

Old faithful, The Kilmarnock Willow, hasn't flinched one iota being moved!  It was still dormant at time of moving.  It's just putting out Catkins now.  Tough as old boots these plants and so long as I keep drenching it - it will be fine.  The Cherry Laurels at the back are being taken off my hands by a neighbour.  They are one of those plants I just should never have bought! 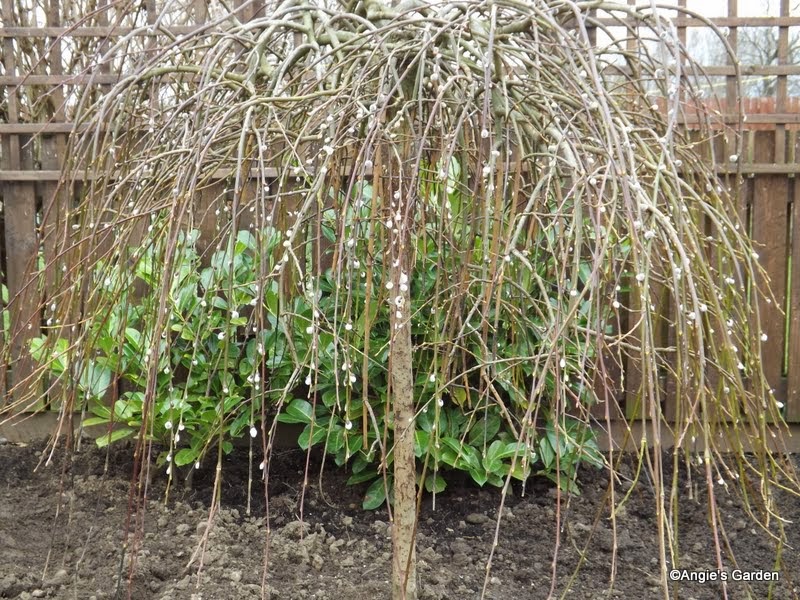 Camellia japonica Brushfield's Yellow and Skimmia japonica Snow White are gearing up to do their stuff! 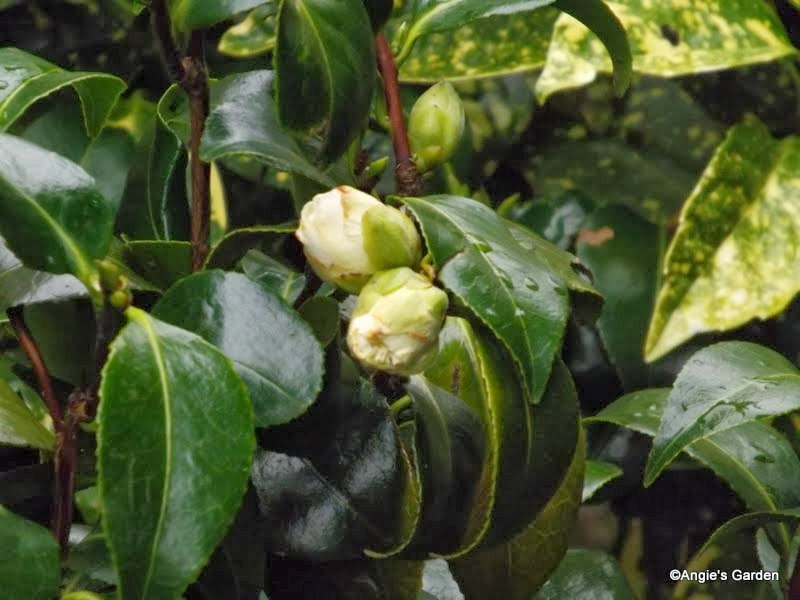 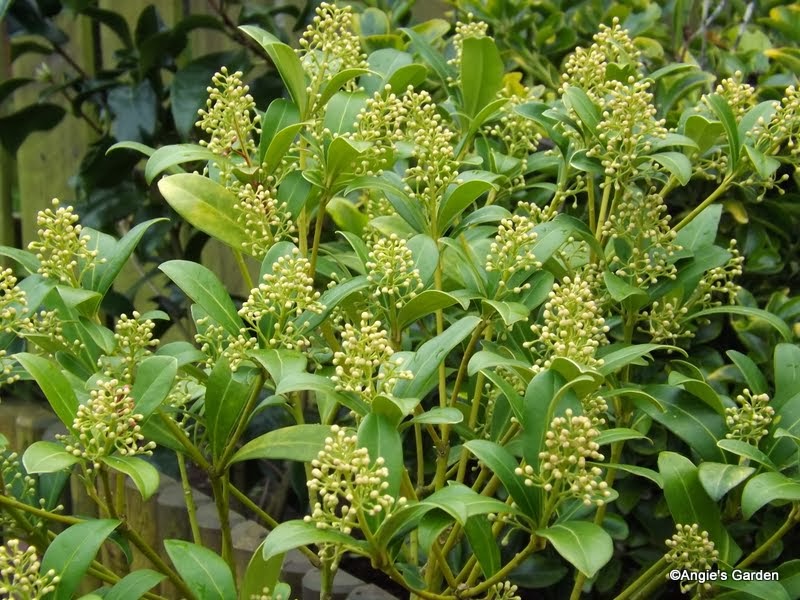 No winter garden would be complete without a selection of Hellebores - I bought a selection of Hellebore plugs when I first started planting out this garden.  They were red and white spotted.  They are now decent sized and are now making a bit of an impact in the garden.
The Crocus and Iris Reticulata growing beneath my Silver Pagoda Dogwood may be over, Corydalis wait to take their place.  I love these tiny spring beauties.  I just wish they'd spread themselves around more!

This pot of Ophiopogon is underplanted with Iris reticulata Harmony and will be followed in a few weeks with Chionodoxa forbesii Pink Giant.  This pot was a bit of an experiment 3 years ago - it seems to have worked and adds a bit of colour in springtime when the Ophiopogon can look a bit flat. 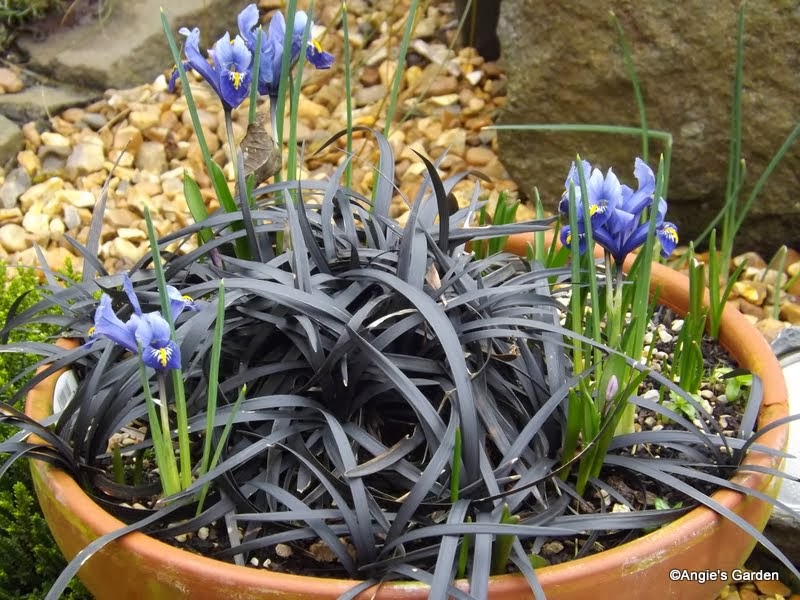 As I walk around the garden, I can see that the majority of the spring flowering Primula are budding up nicely.  Last spring, March 2013 - I bought myself a tiny little 7cm pot of Primula Marjory Banks, it's grown really well this last 12 months.  It now makes a clump with a diameter of more than 30cm.  It must be happy!  There is little information available on this plant other than mentioned on Kevock Garden's website as a Juliana hybrid and the RHS have described it as 'tentatively accepted name on RHS Horticultural Database'.....what ever that means!  It's not difficult too see where this plant now needs dividing as no flowers are forming in the central area.
In the cold frame Primula Elizabeth Killeylay is just about to do her thing.  This poor plant was divide to within an inch of it's life last year.  Not recommended, and is only just now coming back into full health.  She'll be planted back out into the garden soon.


Two more Primula currently residing in the cold frame and like Elizabeth are destined for the garden are new additions.  Bought at the show in Dunblane.  The first is a rather curious Petiolarid Primula that is reportedly supposed to smell of fish (yuk!) - thankfully I can't smell it!  A native of Bhutan, P. calderiana - I fell for it's colour.  The flowers are just about to go over but there is another crown emerging from the base.
To add to my collection of dark leaved Primula vulgaris - Primula garryarde Guinivere - is from the Garryarde collection dating back to the 1920/30s.  It has the benefit of being awarded an AGM by the RHS.  It is hardy down to -20 and will remain semi evergreen in a mild winter.
Of course, I've saved the best till last, you'd expect no less I'm sure.  This tiny little plant is producing an amazing amount of flowers for it's size.  A mere 2 inches in diameter it has around 30 buds just waiting to open.  This white flowers will rise from the base of the plant on red stems.  Saxifraga burseriana Gloria grows in my miniature garden.  It was added to my collection winter 2012/13.  It maybe tiny but of all the plants flowering today, this is by far my favourite.
All that leaves me to do now is to wish you all a great weekend.  Gardeners World starts back on TV tonight, it's time to get a drink of something cold - sit down and relax.  Enjoy you weekend, whatever you have planned.  I'm back to Dunblane to visit Dr Stewart's garden The Linns for the Snowdrop festival!  I did say I was going to get there come hell or high water!  I suspect I'll have lots of photos to share too.
Posted by Angie at 20:49