For the want of a tree

This is a blog to two halves, not strictly about gardening in it's entirety.  Yet there is a connection and one kind of rambles on into the other.

I made a comment recently regarding the lack of a tree in my back garden.

A tree would make a wonderful addition to my garden - not only would it provide a sense of privacy - a tree, particularly a native one would provide a beneficial environment for wildlife.  My garden (to the back) is surrounded by other properties and often it feels like I garden in a goldfish bowl.  I feel my garden big enough to afford the space for at least one small tree.  I don't hanker or yearn for A specific tree - any tree would do really! 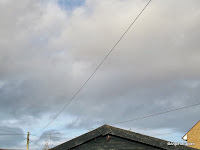 The reason there is no tree......Telephone wires!  My garden is dissected at various points by those blasted things!  Trees and Telephone wires don't mix! I speak from experience, in my old garden, a neighbours tree would continually hamper with the telephone wires.  Those neighbours never bothered and eventually the telephone company took matters into their own hands - what a hefty bill they received!  We were not popular neighbours!
There used to be a tree, Birch I think, over the back.  It also began interfering with the lines and needed to be removed, this was about 4 years ago.
﻿

﻿
This job was not done by professionals and indeed the gentleman responsible for the tree, who has since moved away - left us a little keepsake, just to remind us!  Let me tell you those were a scary few days, I waited with bated breath for a disaster to unfold.  He, his friend and his young teenage son scaled the tree with ropes, numerous hand saws and goodness knows what other tools!  Branches were falling left right and centre, the huge limbs were at times swinging at some odd angles.  How on earth nobody was hurt, goodness only knows.  There was little damage to my garden but Jim next door was not so lucky - a limb fell and crashed right through his greenhouse.  Luckily Jim as at work that day - when he did get home, he was not a happy chappy and WORDS were exchanged (need I say more).  The drama may be long gone and we often have a laugh about the tree felling incident but we have a constant reminder.  These jobs should always be left to the professionals and should not be something the inexperienced tackle.
To the front of the house (also no room for a tree) but we don't do without!    I live around 50m from a site that has been designated a Site of Natural Conservation - various spots along the River Almond in the West of Edinburgh have been granted such status.  There is a surrounding area which has permission for development (housing) and for local residents this is a welcome addition as we often feel that we are the 'forgotten' and 'neglected' by the local authority.  We are in much need of improved amenities to our area.  I thought you might like a wee peek at the views from the front windows.

Zoom into the view through the cherry tree and it's seedlings directly opposite the house.  The expanse of land in between is the north end of the development site.  I should add at this point that there is a height limit to any development and they will not be over 1 storey high, another bonus as the views should not be hampered. 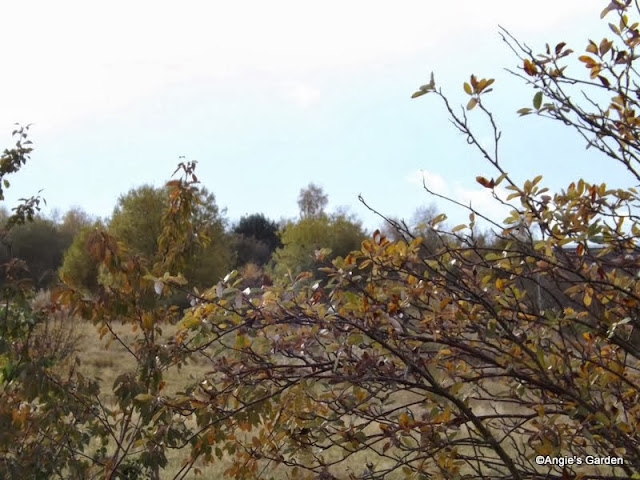 Zooming out, a little more to the west - still a bit of autumn colour left in those trees.  The solid structure in the background is the River Almond Railway Viaduct.  Which was first opened in 1842 and forms part of the Edinburgh to Glasgow railway line.  This viaduct is in fact the boundary line between City of Edinburgh and West Lothian Councils.  We get much better views of it's structure when the trees are completely bare.  There are public footpaths along the site and in years gone by access to Broxburn and beyond was possible.  Nowadays, access about 1 mile along the path has been blocked which is sad.  Maybe one day someone will have the wisdom to re open them. 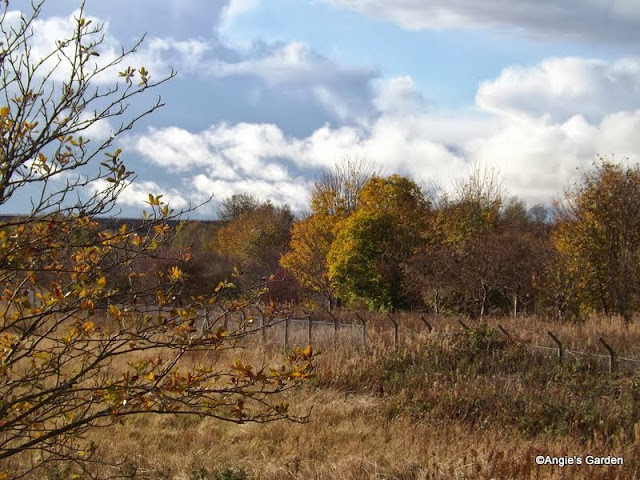 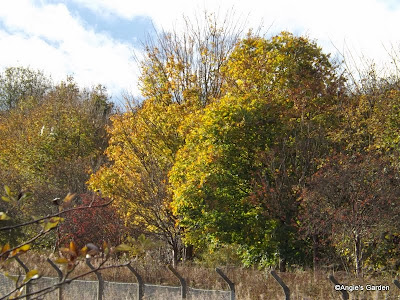 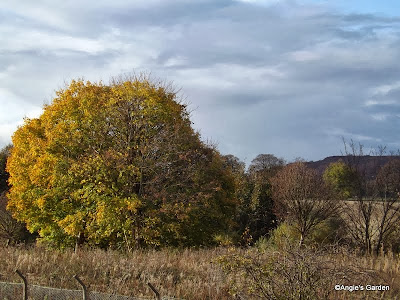 Pan a little to the right and we have views over the fields (yet more telegraph poles).  This land is owned and managed by a local estate - The Newliston Estate.
Beyond those trees there is an impressive country house designed by the famour architect Robert Adam in 1789, in fact it was the last country house he designed before his death.  Here's one I took earlier (a few years ago) of the front of the house.  Now privately owned (family trust) it used to be the seat of  Earl of Stair, the Dalrymple Family.
You would be forgiven for thinking that to the left of the trees is an extremely odd and unnatural looking flat topped hill.  That man made structure is in fact the remnants of industry from a bygone era.  This is what is known locally as the Broxburn (Greendykes) Shale Bing.  West Lothian is steeped in history connected to Shale and Oil mining. 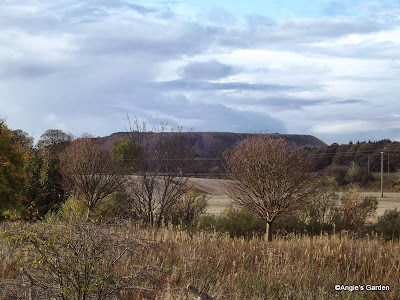 If you want to look at some really impressive pictures and close ups of the Broxburn Bing follow the link.  They are the best images I could find of this sparse and bare but fascinating landscape.  I have vague memories of visits as a child but my mother has vivid unpleasant memories of walking this 'short cut' from her Aunt's house in Broxburn to her grandmother's home in Winchburgh on many occasions.
I hope you have enjoyed a brief view of my surrounding.   I may not have trees in the garden but I don't have far too look or walk to reap the benefits.  I consider myself quiet lucky to live in an area that has a conservation designation and in steeped in Scottish history.
Posted by Angie at 17:19