An online gardening friend asked me if I would mind collecting some seeds from my garden for him.  Easy peasy I here you murmuring.  Not for me!  I'm a bit heavy handed therefore a bit awkward with fiddly things.  Anyway, it's only easy if you know how, isn't it?

This kindly gentleman, who incidentally is not a blogger, has been ever so generous with not only his time, advice and expertise, he has on occasion shared some of his beautiful plants with me.  I really wanted to make the effort for him.  Until now, I've always been a bit obsessive when it comes to dead heading and cutting plants back before they got a change to set seed.  I didn't want a garden full of unwanted seedlings - my experiences with upturned bird feeders put me right off the idea of allowing plants to set seed freely around my garden.

First lesson learned - identifying which plants I wouldn't mind having more of and just letting them do their own thing.  Worse thing that can happen - I spend more time weeding!

﻿
In the hope that the flowers had been pollinated by visiting insects, the waiting game began!  Weeks passed.  Being the type of person who hates letting people down, I didn't want to blink and miss my chance at gathering the seeds.  I watched patiently as the seed pods formed, swelled and ripened.  I think I caught them at the right moment.  Both the Primula and the Meconopsis had a rattle like sound when I tapped.  A few days later, the pods began to open!
﻿

Lets start with the Primula......
I scoured the internet for tips and advice on how to collect seeds.  My friend did give me clear concise instructions but thought it best to do some further research.    Since I had so many Primula, I thought that I'd best start with those.  Each individual stem was snipped off and placed upside down in a large envelope.  Boy, was I surprised by just how many seeds come from one single stem.  Each of those whorls held hundred of tiny black seeds.  I split the harvest 50/50.  Packaged up half to be posted, the remainder was split between sowing some into pots, some scattered around the garden where I would like them to grow and the balance popped into an envelope and stored for a spring sowing.

Meconopsis betonicifolia next.....
I had 4 Meconopsis seed pods to play with - each one ready!  If I was impressed by just how many seeds I got from the Primula - I was almost taken aback by the amount of seeds which came from these!  One seed pod was safely packaged to go south.  Along with advice from Brian - The Meconopsis Group had detailed information on what to do with the seed.  Apparently they should be sown December - February.  I need to store them in a sealed container in the fridge until needed.

Since I had so many I decided to have a wee go at sowing some of the seeds immediately.  There was differing advice on how to sow.  All agreed that type of compost wasn't vital.  Some said seeds should be covered and others disagreed.  I decided I'd give both ways a try.  If I'm being entirely honest here, I really didn't hold out much hope for success.  This was after all my first ever attempt at sowing seeds.

As you can see - the seeds have successfully germinated now - this took just over 2 weeks from sowing.  I covered some with sifted compost, others with alpine grit and to the far right, no covering at all.  I left them outside to their own devices, uncovered in a shady spot.  They seem to have germinated at an equal rate.  There is of course, always the chance that these are weed seeds - time will tell!  I will be watching for those little hairy leaves to appear. 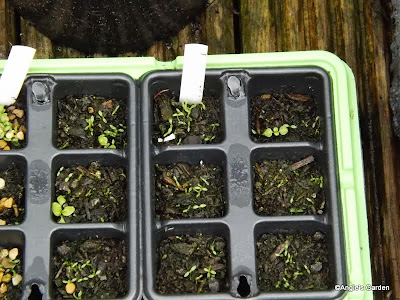 Having ignored the expert advice, on sowing time - I'm very doubtful that these will grow large enough to pot on to bring through winter.  It's fairly obviously my definition of sowing finely differs somewhat to the expert's sowing finely.  I now have far too many fragile seedling in each section than would recommended.  Still, I'm pleased to have got them thus far and I'll just have to see how things pan out!  Lesson learned - heed advice, otherwise I would not be worrying if the seedlings will survive winter, would I?

As for the Tropaeolum seeds!  I'm still waiting on the pretty blue metallic seeds to dry.  I missed an earlier opportunity, some of the seeds have already dropped from the plant.

﻿
Tropaeolum speciosum is by all accounts a tricky plant.  Most of the seeds, when gathered will be sent south but I will hold onto a few and given them a go myself.   This is one plant I have allowed to set seed in the past and thus far, I've unsuccessfully moved and transplanted those seedlings.  I might have better luck with seeds.


I don't mind telling you all that I really am very pleased with myself, I sort of feel like a real gardener, if you know what I mean.  I know one thing for sure, this won't be my last attempt at collecting and sowing seeds.  I've singled out a few plants that I'm raring to give a go!  Next time though, I will follow advice and not waste viable seed.

I've written this blog as part of a series hosted by Beth @ Plant Postings on Garden Lessons Learned.
Posted by Angie at 18:20