Don't you just love a bargain!

I nipped into our local DIY store for a bag of fat balls for all those hungry little birds visiting my garden.  I just couldn't fail to miss the rather large stand bursting with various plants with huge reduced labels on them.

After a while of humming and hawing, should I or shouldn't I - the lady who was manning the stand said to me if there is anything that takes your fancy let me know, I can reduce them a bit more.  Not one to let a chance like this pass me by, I promptly grabbed this as it was the only one I knew for certain was hardy enough for my garden.

Carex oshimensis 'Evergold' AGM.
This sedge should clump up just nicely if the others growing in my garden are anything to go by.
The original sticker on the pot is £10.99 and as you can just make out it was reduced by 50% then the final price of £2.99.
The kindly lady then knocked it down to £2.50 and I was more than pleased with my bargain and it does look relatively healthy for this time of the year and I've just the spot for it!

Fatballs and bargain in hand out I trotted out to the car - homeward bound!

Once home, the groceries were all packed away - the plant was put outside.  Ordinarily I would have got stuck in to finding a home for my new plant but as snow was forecast, I thought it best to leave it tucked up in a sheltered spot for now.

However, something was playing on my mind - a comment made by the afore mentioned kindly lady -
"If they are not all sold today, they will be put in the bin tonight" - it was playing like an echo in my head!  For those of you who are old enough to remember vinyl records, you know when the needle gets stuck and it just keeps on repeating!!  No matter how hard I tried, I could not get those words out my head!

It probably won't come as a surprise to a few of you that less than 10 minutes later I was back at the store - yes, pretty local and a bit too handy sometimes!

There was numerous Palms, of differing varieties, been there done that, not hardy enough! So those were rather quickly disregarded.  Same goes for the Cordylines, Aloes and rather lonely looking standard growing shrub, which although it had no label, it just had that 'tender' look!  Now, if I had been looking to plan a rose garden complete with patio roses, I could have had a trolley full for little more than a crisp purple £20 pound note! Not today thank-you! 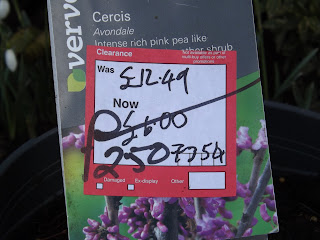 Acers by the dozen - I've already got enough of those.  Stuck right in the middle shelf, hidden from view was 1 shrub, which I wasn't quite sure what it was - down it came for further examination. Cercis chinensis 'Avondale'.   On my wish list for a few years has been it's North American cousin C. canadensis Forest Pansy and I have never been able to source this for less than £60.  Despite being hardy enough etc here in Scotland, I have spoken to a few gardeners who say it doesn't do particularly well therefore I have never been willing to take that gamble.
As you can see already dropped by half to £12.49, then half again, the kindly lady, who by this time had told me her name was Janet reduced it again.  £2.50!!!  A quick google on my smartphone, told me that this should be hardy enough - the label said part shade - spring flowers - moist soil - 3m in height.  Can I make a home for this???  I wonder???

Here it is.  I have used it as a specimen in the lawn - turf was removed and plenty of organic matter added along with some bonemeal for root development. Watered and mulched - bob's your uncle!

Apparently the 2 things these shrubs don't like are chemical fertilisers and root disturbance, so I hope I've just about covered everything and if not -  it will not have broken the bank!


I was in two minds whether or not to underplant with some bulbs but decided against it for now.

There will be the option to increase the size of this border a little to incorporate some bulbs in a few years - I'd like to get an idea of what month this shrub will flower here in Scotland - then I can choose bulbs which will either bloom just before flowering or will compliment it's blooms.  Apparently it is quite a narrow growing shrub so should not be overly wide for this area and I'll still have room for the lawn mower at the rear!

If you grow Cercis, I'd be most interested hear your experiences with this shrub.

Have you ever had a bargain you just couldn't ignore?  Did it thrive or was it just a waste of time?  Do you take chances with plant you would otherwise ignore?

Once again, thank you very much for reading and I do hope that my next blog will be with my first blooms of 2013 - they are taking their time but are getting there!