I set out along the river bank to get some shots of my chosen tree in between showers.  Dark grey clouds were looming in every direction.  Since intermittent showers are forecast for the next few days I decided now's as good a time as any.  I donned my fleece and grabbed my camera, If I am quick I can be there and back before the rain comes on.  As you can see the trees are still very bare.  The only obvious sign that it's not the dead of winter is that clump of dandelions on the right hand side of the footpath.  It's not until you get up close and personal that you can see buds are fattening. 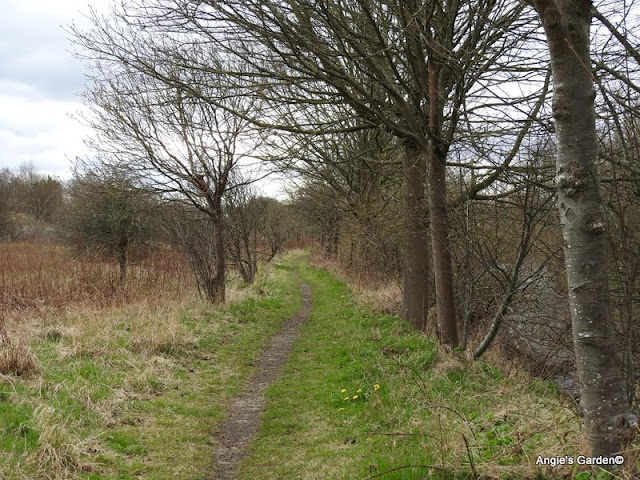 However, I was not alone.  I had company.  Kooki Kat decided he was coming with me.  I could hear the tinkle of his bell as he bounded along the path to catch me up.

I rounded the bend and noted my tree looks exactly the same as it did last month.  It was suggested that my tree could be a common ash. Apparently I should be able to confirm this if the buds are black in colour.  The buds are not black as you can see they are a pale green. I did note a few trees along the way had distinctive black buds but not my particular tree. 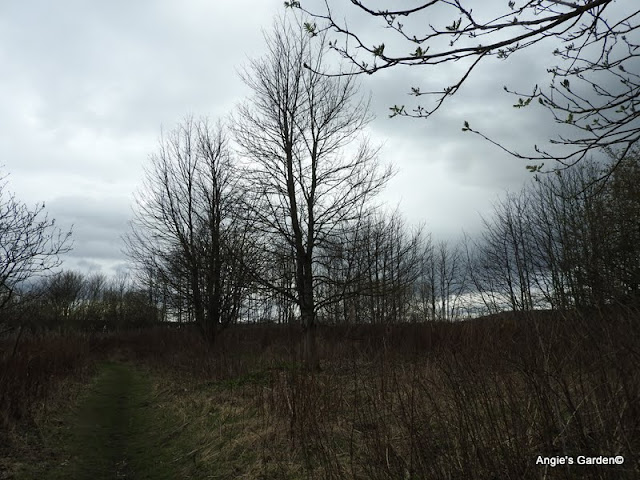 There is much more greenery appearing from beneath the debris.   As you will soon become aware I am not only rubbish at identifying trees my knowledge of wildflowers is just as embarrassing. 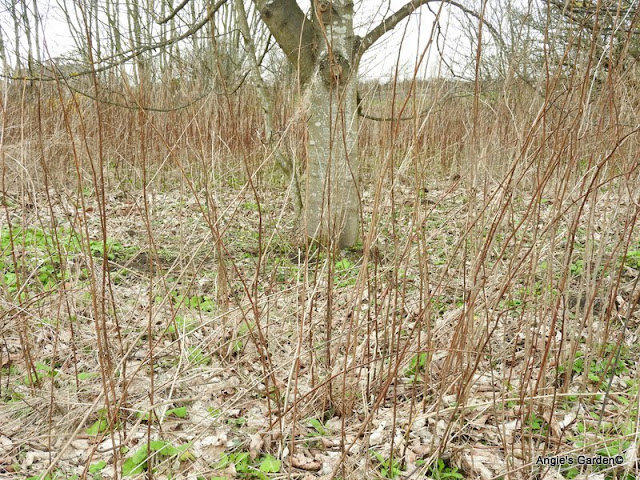 I am quite familiar with the brambles (Rubus fruticosa) and the viciousness of those nasty thorns.  I trampled on a few stems to get a better look round the back of my tree.  The dark side!  As expected moss is thriving here.


As are the lesser celandines.   They are just coming into bloom. 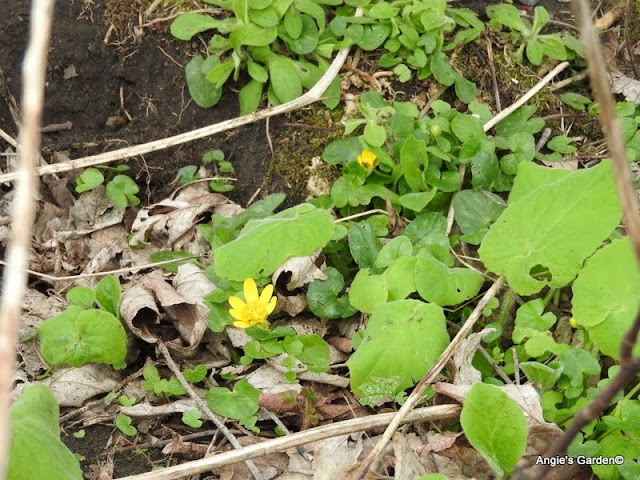 A newly 'hatched' bloom from what I gather is commonly known as butterbur or coltsfoot.  Petasites hybridus is afforded the perfect conditions here to thrive. 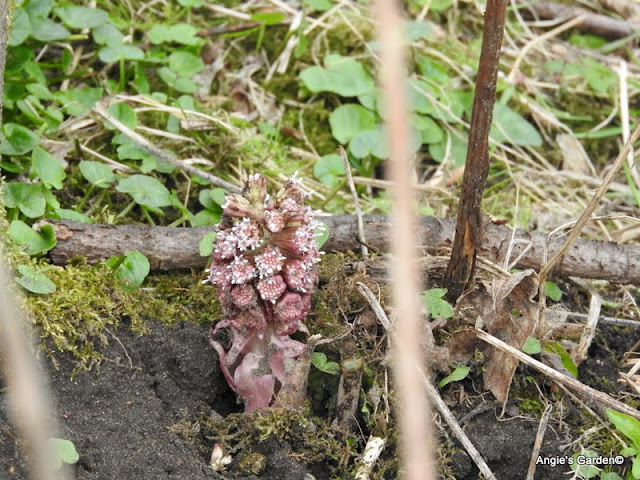 This next species I want to say is chickweed but I am not so sure.  I have tried to identify this from images online but I am finding nothing as definitive.  Pictures are mostly of wildflower's blooms.   I did warn you know that my knowledge of wildflowers is dire.  I am hoping someone can clarify just what this is for me.   Please put me out of my misery. 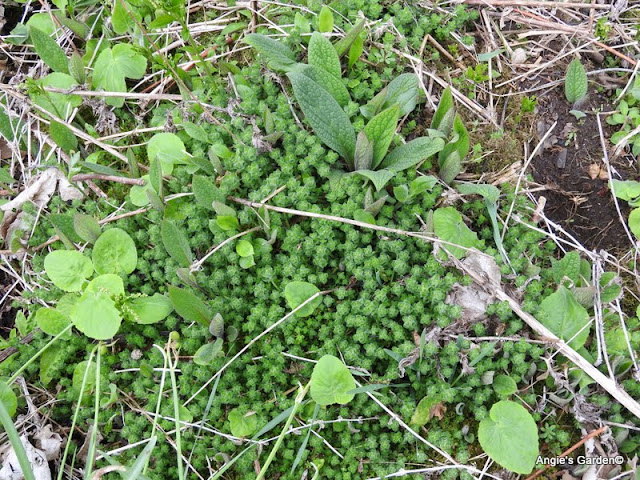 Something has obviously been digging here.  More than likely moles if you take the mound of soil into consideration.  The moles are very active here.  Rabbits are abundant in numbers in this area too but since there is no visible rabbit dropping I dismissed them as the cause.  I doubt too that rabbits would have attempted to make their burrows in such an open site. Thankfully neither critter frequent our gardens here. 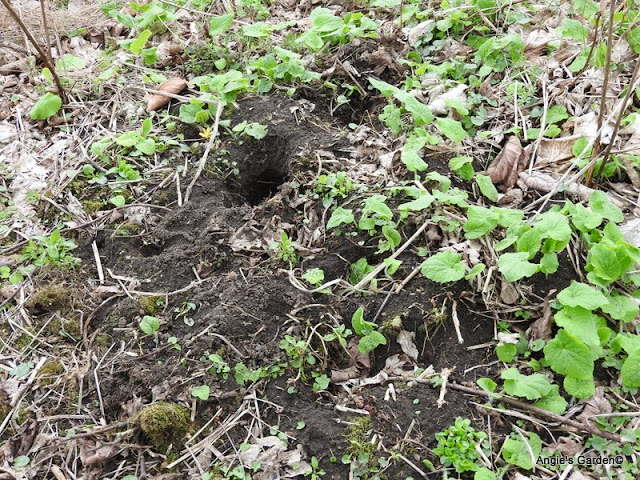 Speaking of rabbits, my clodhopping around obviously disturb one or two.  3 adult rabbit charged straight past me.  I don't know who got the biggest fright.  The rabbits, me or Kooki.  I am thankful that he is useless at hunting.  He knows it too.  He didn't bother giving chase. 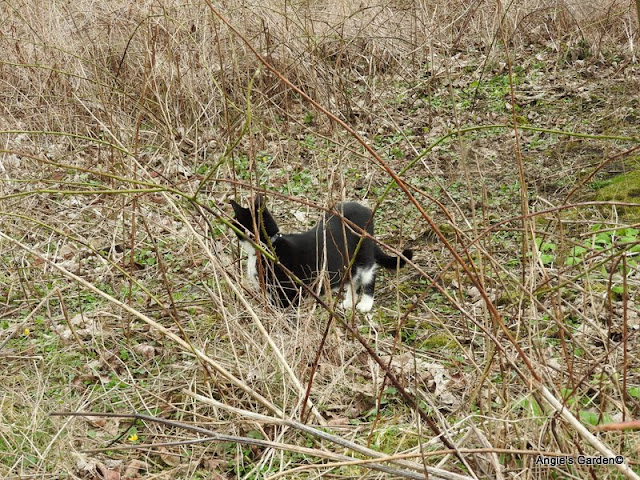 I didn't want to hang around too long, those rabbits might just pique his interest long enough to encourage him to run off in the opposite direction.  I distracted him with the strap from my camera and teased him all the way home with it.

Tree Following is a meme hosted by Pat at The Squirrel Basket, you can read more about it here.  Thanks for reading and apologies to Pat for still not having an ID so she can update her list.
Posted by Angie at 10:54