Slowly but surely Autumn is creeping upon us but not before we get a bit of late summer sun.  It really does deserve a fan fare!  It's been a pure pleasure to garden this last week.  I can't tell you how pleased I am about this.  I've been extremely down in the dumps about the rotten weather we've experienced. 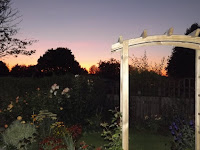 The first view, as always for my End of Month View.  This meme is hosted by The Patient Gardener at the end of each month.  Just look at that sky.  Ahh!  Skys such as these really have been few and far between this year. You can also just make out some autumn colour on the tops of those trees that line the walk along the river.   We've had some amazing sunsets this last few nights too. I am usually getting ready to leave for work as the sun is going down at this time of the year and I made a effort last night to be organised to catch those wonderful skies.  Guess what?  Yes, you guessed right.  Last night's sunset was really quite dull by comparison.


It was not until I upload this shot that I realised this view shows how out of balance both sides of the garden is.  I am unsure if the hedge is to blame or my planting.  The roses on the right hand side.  R. Jude the Obscure and Graham Thomas should be taller in future years and the Cotinus in the far corner will eventually add height here so I just need to have a bit of patience I think.  Me, patience? That's a laugh!  Not one of my finest qualities, I admit.  The rogue Iris, as you can clearly see is still bang smack in the middle of the arch, another one for the autumn move.

The view looking towards the house, to the left you can see how profusely the roses are blooming again.  I can't praise both these roses enough.  R. Lady of Shallot and R. The Lark Ascending have been astounding this year in spite of the weather. I wonder if they are maybe suited more to the cooler weather.  That's obviously something I will have to observe over the coming years.   Rosa Teasing Georgia has finally got going too and is now making quite good progress up the side of the arch.  Until now this rose has been incredibly slow.  Hopefully putting all it's energy into getting down some good roots.  All the Rudbeckia are still flowering well, as are Crocosmia George Davidson.  It seems that I've lost Crocosmia Emily Mackenzie, she has not made an appearance this year.

Rosa The Lark Ascending.  I just had to share this shot with you.  Granted the aphids are back but they have not stopped this fine display.  This rose truly is one for the bees - they love it! It does not have such a strong scent as some of the others but I can forgive it for that.

Standing in front of the house this hazy afternoon shot is pretty well the best of a bad bunch.  Salvia Amistad in the corner near the hedge is now getting tall.  Another plant loved by the pollinators. There is a side of me disappointed that it does not fit in with my scheme here but I worry not since it is not hardy here (proven) and these plants were cutting from last year's single specimen I grew.  I will take more cuttings this year and plan to grow them in the top border in the back garden.  It has turned out to be one of my favourites.  Oddly enough it has not struggled with the weather either, yet I would have expected it too.  After all they are sun worshippers, are they not?

So, what if anything is new?  I mentioned last month that I was considering purchasing Rosa Hot Chocolate for the gap created by the removal of the Anthemis and one or two other things. Well, as things turned out, rose stocks at one or two GCs were rather depleted but thankfully I managed to eventually source one. It was the only specimen they had left.  Much to my relief it was healthy enough and came home with me. It now has it's own little spot between the arch and R. Fighting Temeraire.  I have planted a yellow daylily, Hemerocallis Golden Chimes  at the edge nearest the path which I think should compliment if nicely.  The single bud it had at time of purchase did bloom and I was able to see it was more appropriately suited to my scheme out here than Rosa Summer Song had been. 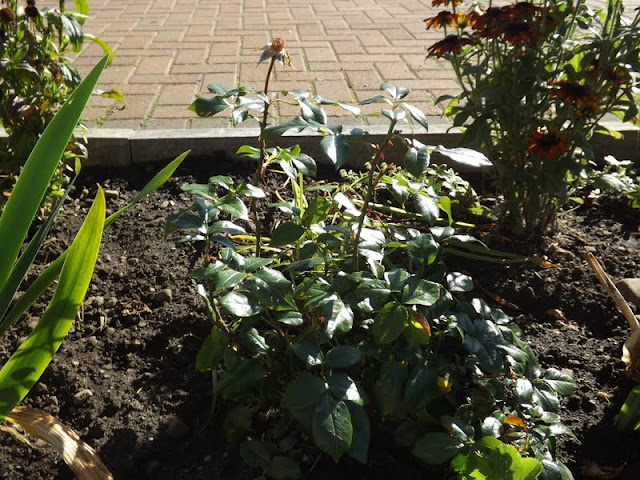 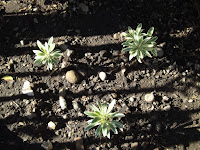 The Erysimum cuttings I took earlier have rooted well and 3 of them fill the corner by the gate now that the Leucanthemum has gone.  I want to thank everyone who encouraged me to give Erysimum cuttings a go.  I had it in my head they'd be particularly difficult but it seems not.  One plant  will do the job but I am hedging my bets.  Hopefully they should all grow as well as the parent plant I have.  It was as small as these when I was given a cutting by a friend.  I will select the best one of the three come spring time to continue to grow on.  The other two will become possible replacements for the expensive brown and orange coloured Rudbeckia should they fail to come through winter.  I suspect they might well be one of those plants that although claiming to be hardy, they will more than likely turn out to be borderline hardy rather than fully hardy.  I am considering protecting the crowns of these plant with straw to give them at least a fighting chance.  Since planting a few months ago they have put out no new growth at the base.  I can't remember what the other Rudbeckia had done in previous years.

I need to make preparations for lifting the Dahlia and Cosmos tubers and I suspect that by this time next month this whole place will look somewhat bare as the autumn clear up begins.  I also plan to give the roses a winter mulch of manure, a friend swears by this.  I'll give most things a try at least once to see if it provides any benefit.

Pleased with the amount of plants that are still flowering well, I leave you with a collage of a few of the best.  Thanks for reading and as the weekend approaches - have a good one! 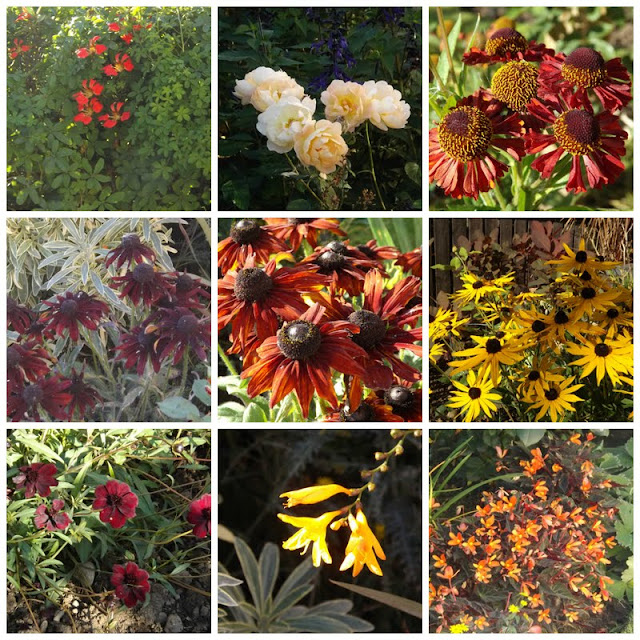