This month's End of Month View post is really all about the blooms.  The front garden is quite floriferous right now.  Most of the roses have found their mojo unfortunately the daylilies are still looking for theirs!

As we move nearer to Autumn, the time has come for me to make some serious decisions on which plants I want to keep here and which will need to find alternative quarters.  Many have done well and although thriving, they feel kind of 'out of place'.  You already know that I've been removing those that completely clash with my scheme.  This came as no surprise to me as I rather hurriedly  filled gaps last year when I had no real need too.   Over stocking with plants is an awfully hard habit to break.  There is only one problem area I need to address.  The decided gap between the Anthemis and the Arch.  I've temporarily filled it with a pot of Helenium I had but it seems to me that the wind has caused the Anthemis to grow stiffer on one side than on the other and it looks rather odd.  It has caused me to take a bit of a dislike for it.  That and the fact I think it was wrongly labelled.   It is a good 30cm taller than I had expected it to be.  It's supposed to be A. tinctoria Sauce Hollandaise.  I need to find an alternative planting solution.  The hedge has been trimmed and some of the Tropaeolum blooms remain.  The Tropaeolum has liked the cool damp conditions this year. 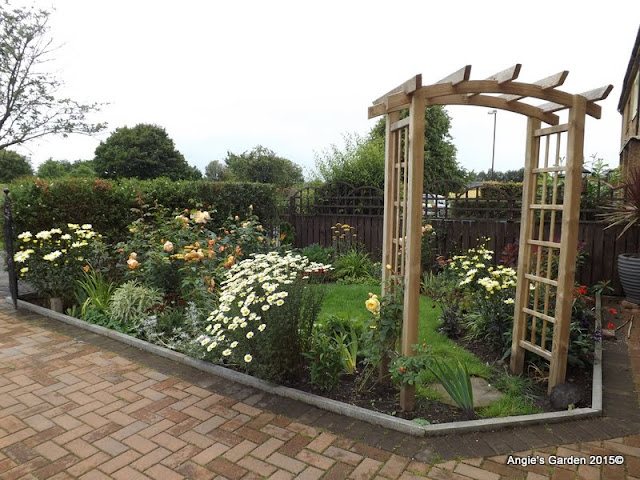 I have been receiving many compliments from neighbours and passers by on how wonderful the roses are.  Especially last weekend, we had a police incident (fire arms according to rumours) in the village last weekend, with no vehicular traffic in or out of the village for almost 12 hours.   This meant even more passers by than usual, nosy folks were out in force.  One lady even brought her OH back to see the whole garden and left armed with a list of plants she wanted for her own garden and a promise from me of supplying her with one or two or possibly 6 perennials I can easily propagate for her in autumn.

Standing in front of the living room window, you can see pretty much every thing that is in bloom right now.  To be honest, I had been expecting the roses to be taking a break right now and the daylilies to be the star of the show but it appears not to be the case.  I have a large pot of daylilies waiting in the wings.  I am waiting for them too bloom before I decide if they are right or not.  They are Hemerocallis Pink Damask and although the name suggests that they are pink, they are not quite and I feel they might just fit in with the colour scheme.   I should know in the next week or so when they finally bloom.  They really do need a home in the ground, they were lifted from the back garden last year and they are in dire need of getting their roots down. 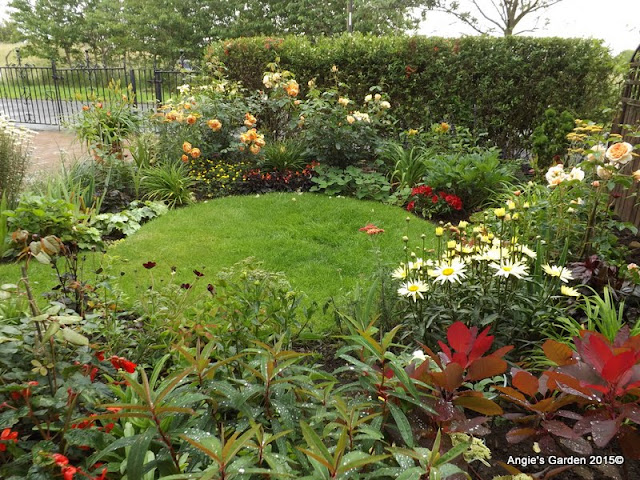 This is the view from the front gate, I have not found the heart to lift the Eryngium yet.  This is another casualty to the wind.  It is growing horizontally rather than vertically.  The Leucanthemum are quite dominating and although not quite fitting in with my scheme they stay for now as they don't look too bad, they are the best Leucanthemum I've ever grown.  L. Broadway Lights are a nice height and I have found they don't need staking like some of the others I've tried.  The dark brown Rudbeckia have really settled in, I hope they do well and come through winter, I'd like more of these but only purchased one pot as they were quite expensive. 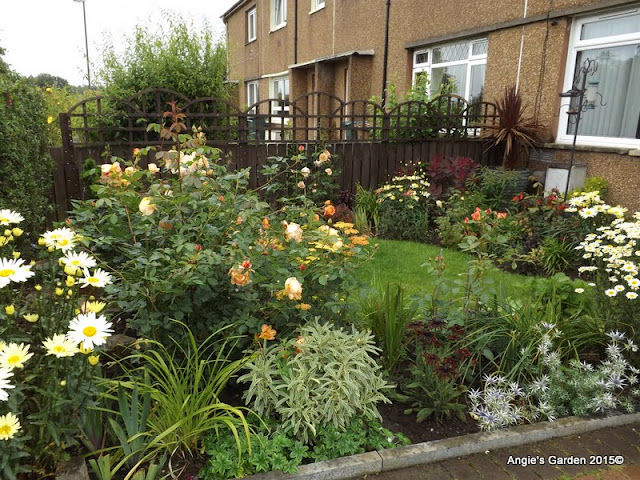 I said at the top of this post that it was all about the blooms.  Just for reference really, a look at what plants are flowering right now. 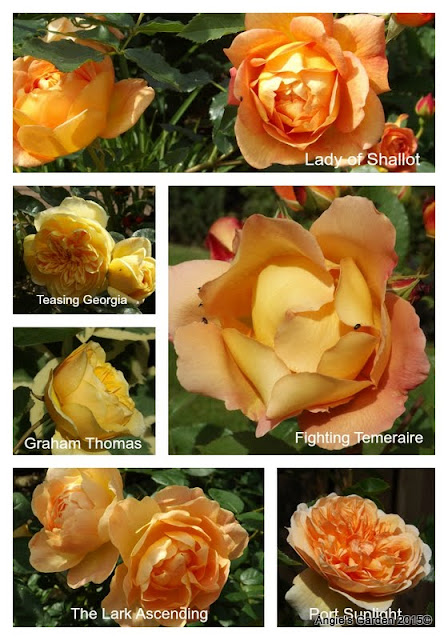 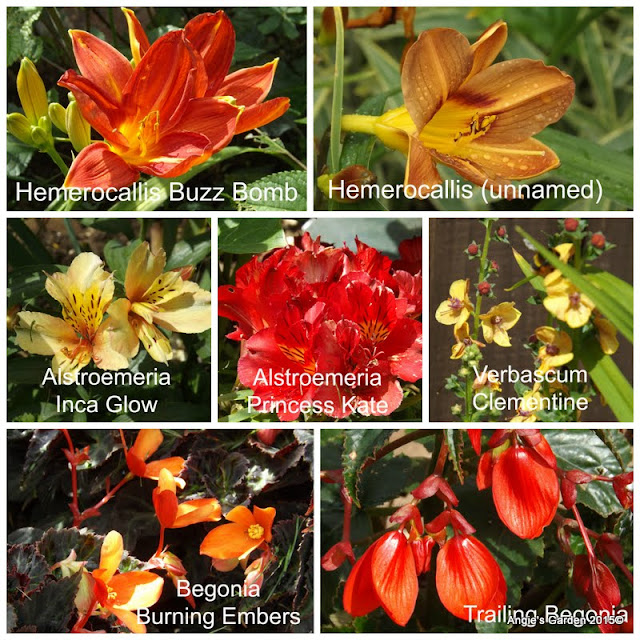 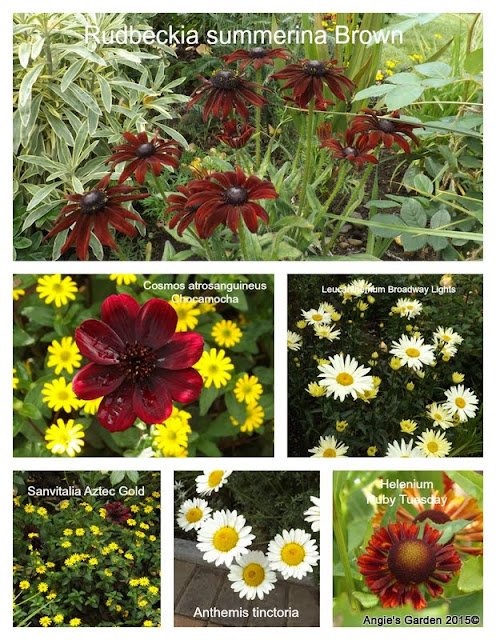 The Achillea - there are three varieties growing.  A. Inca Gold, Fanal and Terracotta are plants that I've been particularly pleased with.  Although to be honest, I am struggling to see the difference between Inca Gold and Terracotta.  I wonder if they are the same plant with a different name.  I've read that this kind of thing happens in the world of plant breeding.   I like the combination of the Achillea and the roses.  These are definitely on my 'keeper list'.
Thinking towards autumn and the changes I need make I purchased a new rose.  One from my wish list.  DA's Rosa Summer Song.  This rose was originally on my must have list for the front garden but I could not source it locally at the time.  R. Lady of Shallot was its substitute at the time.  I found this rose for sale a couple of weeks ago and I could not resist.  Now that the blooms are opening I am having doubts about the colour and I can't decide quite where to place it.  I'll get there in the end no doubt!  The scent from this rose is absolutely gorgeous another reason I am determined to keep it.

Thank you for reading and a big thank you, as usual, to Helen over at The Patient Gardener's Weblog for hosting our End of Month View posts.  Please pop over or even better, join in - everyone's welcome!  I'm off now to catch up with what's going on in your garden right now.
Posted by Angie at 19:09