My post this month  for Garden Bloggers Foliage Day (albeit a tad late) is a bit of a mish mash on what's going on in the garden this week.  Apoligies for my tardiness Christina.

It's still cold here, regular frosts for well over a week now.  The lowest temperature at the beginning of the week was a chilly minus 5.  There is no wind, no cloud and yet the bright afternoon sun is barely warm enough to activate a thaw.  However, it's nice to see that the sun is now high enough in the sky to brighten and add warmth to the sunnier side of the garden.  In sunnier spots new growth is apparent on some plants yet on the shadier side of the garden there is very little sign of life.  The odd clump of Galanthus nivalis are only just poking their noses up.  Frost and decaying leaves surround some snowdrops - Spring Promise

﻿
Amongst the crips brown leaves and stems of one of the Clematis, an unopened bud reminds us of those sunnier months.  Winter reality! 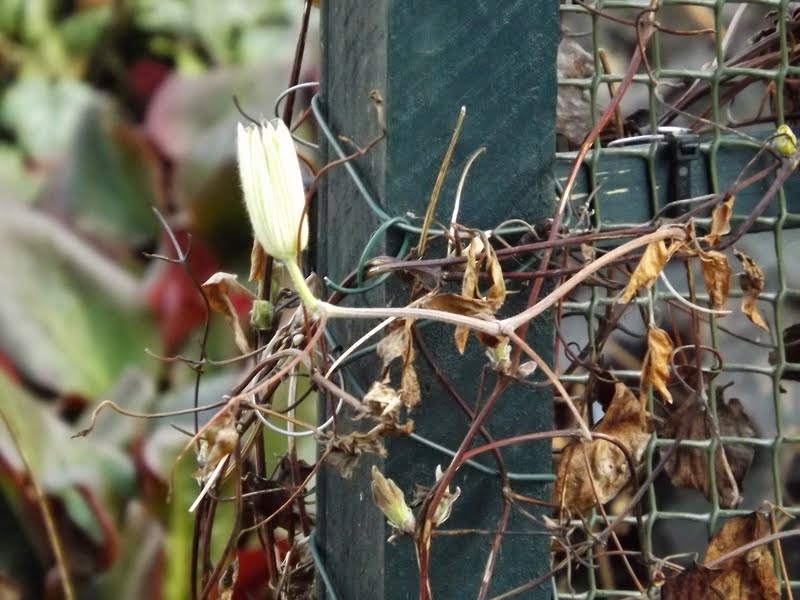 The stark contrast between the old and the new on another Clematis, this time in a sunnier spot and much further on in new growth this January.  New shoots begin to unfurl from the buds, Spring Promise! 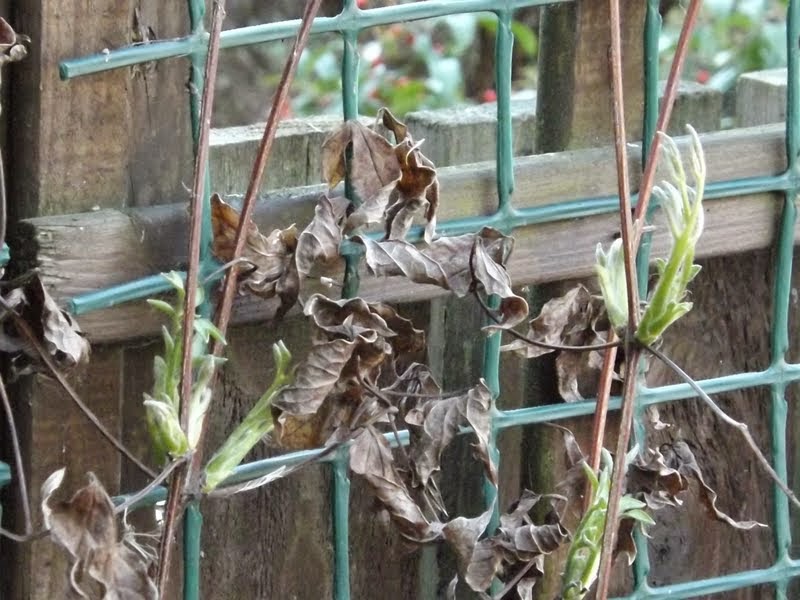 The Zantedeschia aethiopica had until the other day coped remarkably well with the colder temperatures, now admitting defeat and collapsed in a heap.  I usually protect the crown of this plant with straw but now in it's fourth year, I am hoping it's mature enough to cope without protection. Winter reality! 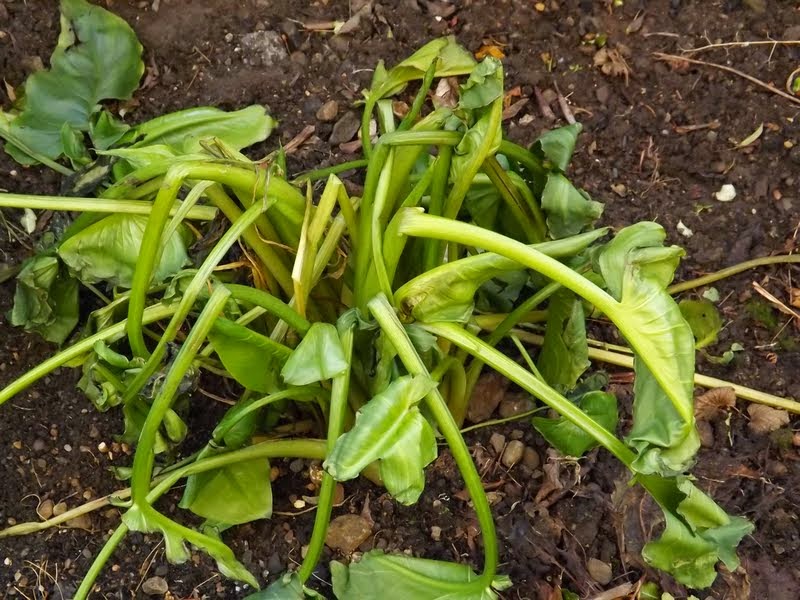 The Japanese anemone, Anemone x hybrida Andrea Atkinson put up a similar battle but succumb a few days back.  Yet behind her, the buds of Camellia japonica Brushfields Yellow are fattening up.

The ferny foliage of Corydalis flexuosa Pere David thawing out and a few skeletal remains of the Hosta needs removing.  Spring Promise! 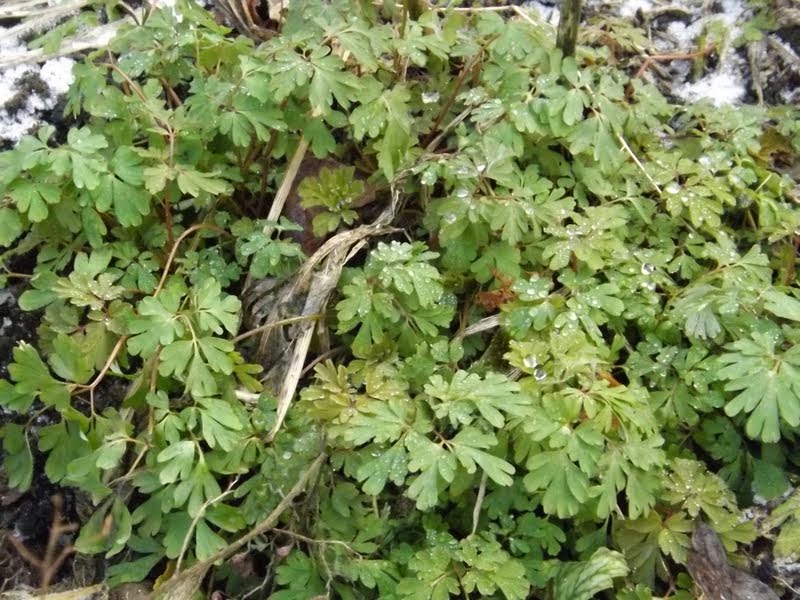 One of my favourite shrubs in the garden, Cotinus coggygria Dusky Maiden still holding onto a few leaves.  Albeit a bit wind and frost bitten. Autumn remnants! 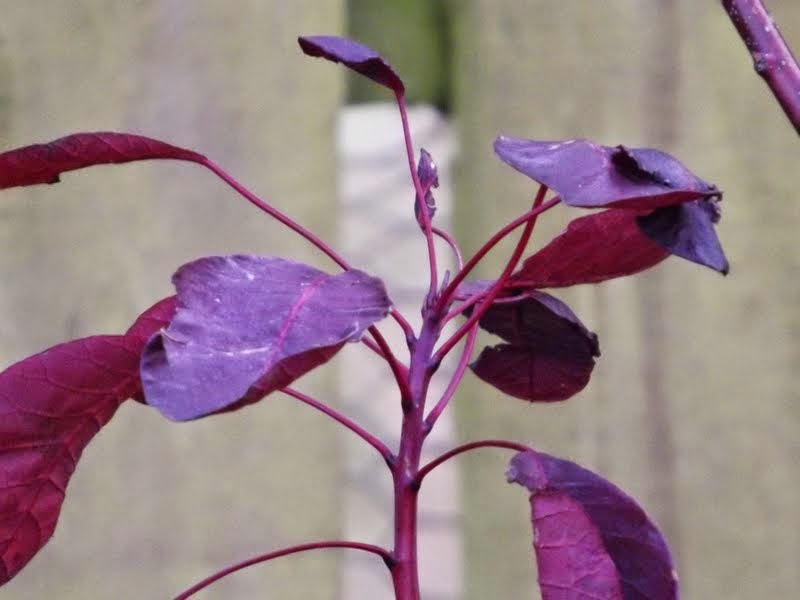 Popping up through the variegated foliage of Euonymus fortunei Emerald Gaiety a solitary Crocus bub is emergine.  Do please excuse the bird poop. Spring Promise! 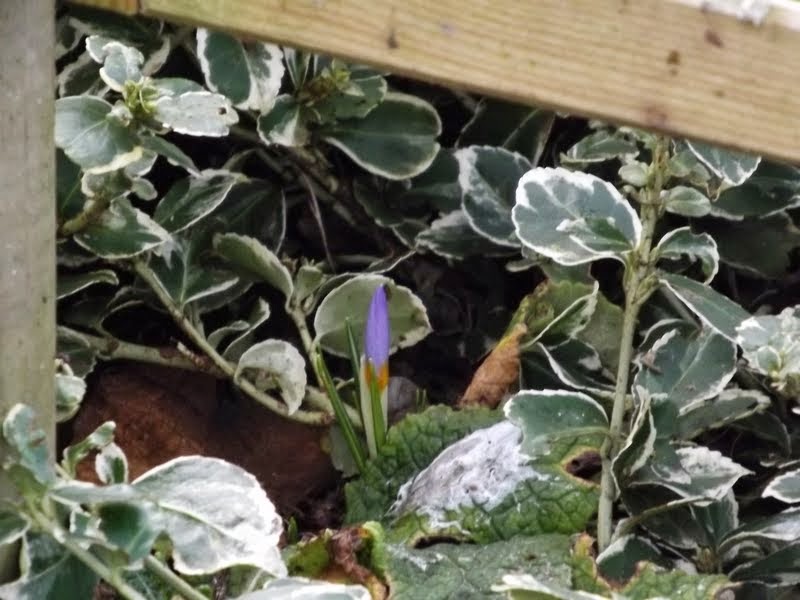 Up on the decking, the pots which add a bit of greenery to the area all year round a Chrysanthemum is just about to give up the ghost amongst Ivy, Goldcrest Cypress and Lavender. This display would still look rather fresh had I bothered to cut back the Chrysanthemum but given that was still flowering at Christmas time I could not bring myself to do it. Winter reality! 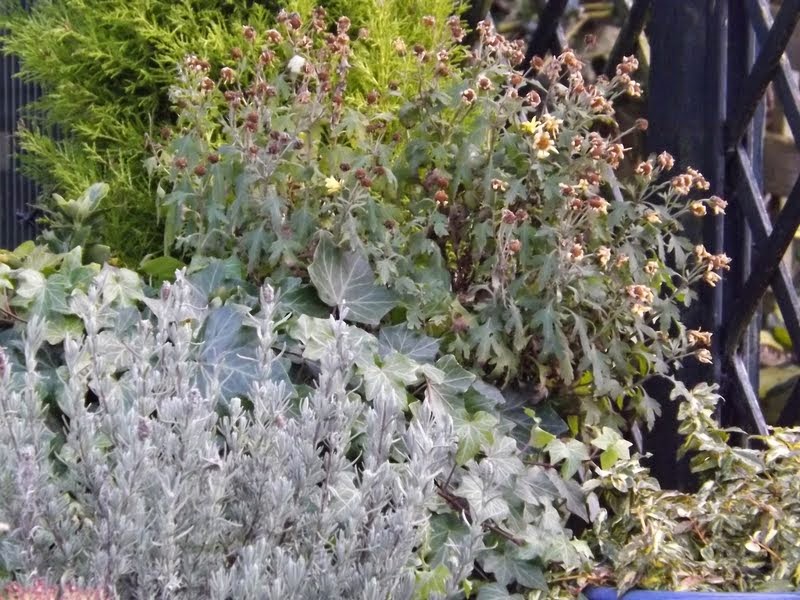 On the shadier side of the garden, a mushy mound of Primula is quite the sorry sight.  Turn around and it's quite a different story on the sunnier side.  Those new leaves of the drumstick Primula, tightly closed are protecting the forming flower buds within.  Reality and Promise side by side. 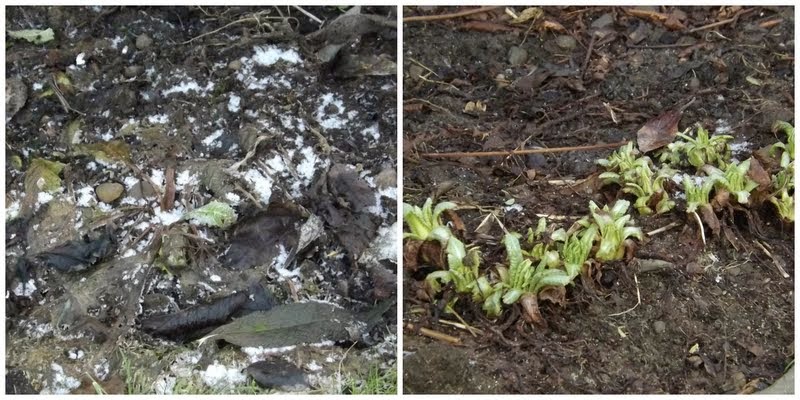 The shady evergreen corner, adds a bit of structure and yet those leaves need still need clearing up. Fallen leaves are indeed a winter reality! 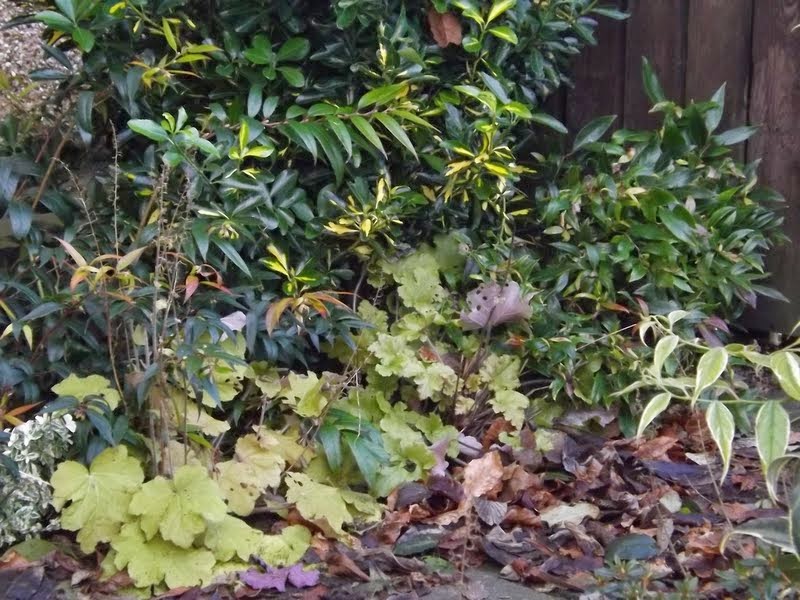 The fresh new foliage pokes its way from beneath the surface of this Pulmonaria Blue Ensign.  Spring Promise!


Elsewhere in the garden, pretty much all the other Pulmonarias look like this.....Winter Reality!

I find in my garden Epimedium x perralchicum  Frohnleiten holds up particularly well compared to others in winter.  Pretty soon though those leaves will be cut back to allow those bright yellow blooms to stand tall.
﻿
Whilst Frohnleiten is billed as evergreen, the semi-evergreen Epimedium warleyense Ellen Willmott keeps tight those gorgeous autumn colours.

All around the garden the Aquilegia are coming to life - those new shoots are untouched by the frost.  Spring Promise! 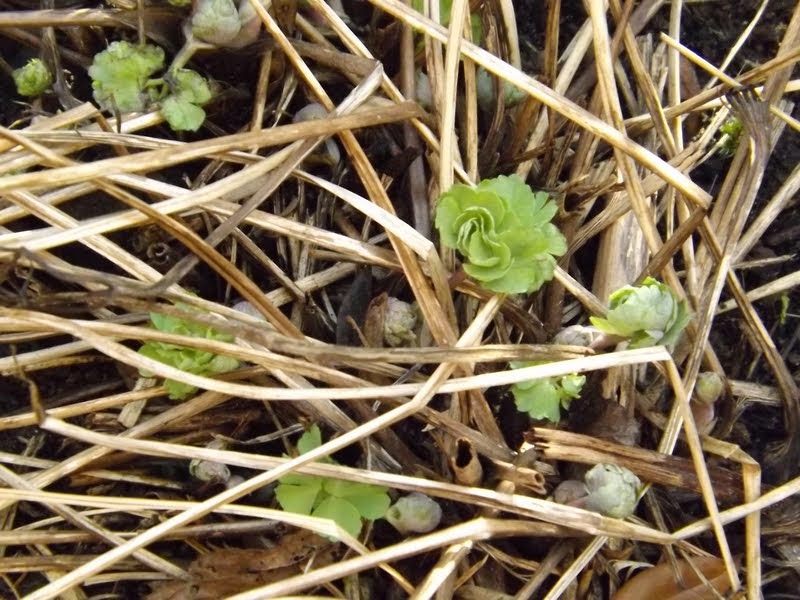 The Leucothoe fontenesiana Whitewater growing round the back of the kitchen extension is really coming into it's own now.  This is its 3rd year in my garden and I'm pleased with my attempts at using it for evergreen fence cover and grateful that it is now tall enough to reach the trellis on the top of the fence.  It is full of buds and should flower beautifully this year - touch wood!  It has only flowered sparsely in previous springs.  Spring Promise!

It felt odd this week that I was not able to get out into the garden.  I generally try to find something to do when I've nothing else on but this week it was just not practical to get out there, the weather was not conducive to any sort of garden activity.   Other than feed the birds and take some pictures that is.

In an attempt to cheer myself up this afternoon I took myself out for a spot of lunch and a bit of retail therapy.  Garden related retail therapy of course!  I spent the last of my Christmas vouchers on some spring pretties for the garden, more on those in a later post.  Where ever you are, I hope you are able to enjoy your garden this weekend.
Posted by Angie at 18:59